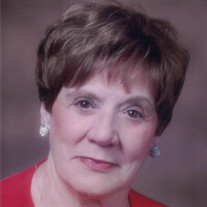 Yvonne D. Robertson, 94, of Pittsburg, KS, passed away at 12:58 PM., Sunday, February 27, 2022, at Via Christi Hospital. She was born December 16, 1927, in South Radley, KS, the daughter of Joseph and Olga (Castelli) Doti. She graduated from Frontenac High School in 1945. On June 18, 1947, she was united in marriage to Clifford J. Mattivi, together they had three children. He preceded her in death. Yvonne was co-owner and manager of Golf Land, a driving range and miniature golf course, from 1947-1952 and 1963-1967 at two locations in Pittsburg. She was a member of the Sacred Heart Catholic Church in Frontenac, KS and served as President of the Altar Society in 1949. In 1961, she assisted in the formation of the first layperson school board for St. Mary’s schools and served as a board member for four years from 1961-1965. Yvonne spearheaded the formation of an investment group, Parkview Land Developer, Inc. to purchase the original Holiday Inn hotel property in north Pittsburg in 1967. She oversaw the construction of the Holiday Inn which is now the Lamplighter Inn. She served as the original Innkeeper as well as being the President and General Manager from 1969-1980. She was an original partner in Pitt-Plastics, Inc. in 1972. Yvonne spearheaded the formation of another corporation, Extra Inn, Inc, purchasing land and constructing the original Extra Inn Hotel, which is now the Regency Inn. She was the General Manager and President from 1977-2000. In 1981, Yvonne married Jack Robertson, he preceded her in death. Jack and Yvonne were the owners of The Golf Car Center, an E-Z GO golf car dealership from 1982-2000. Yvonne was a steering committee member for the renovation of St. Barbara’s Catholic Church to a community center located in Chicopee, KS in 1994, where she served as board member for three years. In 1999, Yvonne and her three sons formed the Yvonne D. Robertson Endowment for Academic Excellence. The endowment is an educational endowment to be used by the St. Mary’s schools to improve students' academic performance. Yvonne was a wonderful mother and Noni to her grandchildren. She will be deeply missed. Survivors include two sons, Brad Mattivi and his wife Gail of Pittsburg, KS, Scott Mattivi and wife Brenda of Monument, CO, daughter in law, Vickie Mattivi of Olathe, KS, seven grandchildren and six great grandchildren. She was preceded in death by her parents, two brothers, James Doti, Joseph Dean Doti, both husbands, a son Gregory Mattivi and a grandson, Joseph Dean Mattivi. Mass of Christian Burial will be held at 10 am, Friday, March 4, 2022, at Our Lady of Lourdes Catholic Church in Pittsburg, KS with Celebrant Father Jerome Spexarth. Burial will follow at Garden of Memories Cemetery. The Parish Rosary will be recited at 6 pm, Thursday, March 3, 2022 at Bath-Naylor Funeral Home Pittsburg, KS. The family will receive friends following the rosary at 6:30 pm at the funeral home. Memorials may be made to the Yvonne D. Robertson Endowment for Academic Excellence. These may be mailed or dropped off at the funeral home, 522 S. Broadway Pittsburg, KS 66762. Arrangements are made under the direction of Bath-Naylor Funeral Home and Crematory. Condolences may be left at www.bathnaylor.com.

The family of Yvonne D. Robertson created this Life Tributes page to make it easy to share your memories.

Send flowers to the Robertson family.