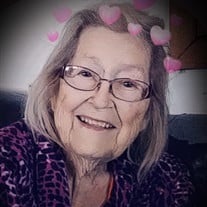 Wilma Ellen Trout, 88, of Liberal, Missouri, and former resident of Girard, Kansas passed away October 28, 2018 at her home in Liberal. She was born December 26, 1929 in Pawnee Station, Kansas, the daughter of James and Helen (Ausemus) Russell.... View Obituary & Service Information

The family of Wilma Ellen Trout created this Life Tributes page to make it easy to share your memories.

Send flowers to the Trout family.