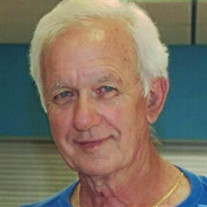 William Francis Lloyd Forrest Sr., 74, of Scammon, died September 17, 2018, at Via Christi Hospital in Pittsburg. Born July 31, 1944, in Mindenmines, Mo. Bill was the son of William and Una (Jones) Forrest. Bill graduated from Mindenmines high school. After high school, he served in the United States Airforce from 1962-1966. He was the vice president and plant manager of Pittsburg Steel for 26 ½ years. In 1990 Bill opened Forrest Building and Fabrication in Frontenac. One of his proudest moments was building and installing the White House gates. Bill had served as mayor of Scammon, first in 2004, he filled a vacancy. In 2005 he was elected to serve a two-year term and was reelected in 2011. He was also a long time member of the Scammon City Council. Bill married the love of his life, Joyce Roberts March 21, 1997. Bill was a member of the St. Bridget’s Catholic Church in Scammon, Knights of Columbus and a Past Grand Master of the Masonic Lodge of Pittsburg, Ks #187. Bill enjoyed hunting, working cattle and visiting the casino. His favorite thing to do was to spend time with his friends and family, whom he loved very much. Bill was preceded in death by his parents and sister Eva DeBoutez. In addition to his wife Joyce, of the home, Bill is survived by sons, Shannon Forrest of Pittsburg and William Forrest Jr. (Jana), daughters, Janet Humble of Scammon and Kim Carr of Albuquerque, New Mexico. His brothers, Stanley Forrest Sr. of Pittsburg, and Bobbie Forrest Sr. (Lila) of Farlington, along with grandkids, Dalen Carr, James Humble, Andrew Forrest, Keely Carr, Jessica Humble, Kyler Carr, Logan Forrest, Kinsley Carr and Dalton Carr also survive. Mass of Christian Burial will be at 10 a.m. Friday, September 21, at The St. Bridget’s Catholic Church. Father Jeremy Huser will serve as celebrant and concelebrants, Father Larry Parker, Father Thomas Stroot and Father Chrysostom Ah Maung. Interment will follow in the St. Bridget’s Catholic Cemetery. The parish rosary will be recited at 7 pm Thursday, September 20, 2018 at the St. Bridget’s Catholic Church. The family will receive friends following the rosary. Memorials may be left to the St. Bridget’s Catholic Cemetery; these may be left or mailed to the funeral home. Condolences may be left at www.bathnaylor.com. Arrangements are under the direction of the Bath Naylor Funeral Home of Weir. ­­

The family of William Francis Lloyd Forrest Sr created this Life Tributes page to make it easy to share your memories.

Send flowers to the Forrest family.