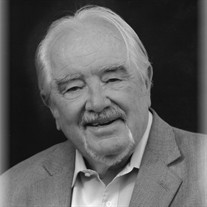 William J. "Bill" Sollner of Arma died November 11, 2017. He was born in Downs, Ks on July 28, 1925 to Dr. Anson Huey and Esther Ann Sollner, later moving to Arma, Ks where Dr. Anson H. Sollner was a dentist for many years. Bill was a 1943 graduate of Crawford County Community High School. He entered training to become a Naval Aviator immediately after graduation and remained in the Ready Reserve, flying regularly until 1956 when he received a Fulbright assignment to teach a year in Germany. Upon returning from Germany, he resumed his teaching career in Battle Creek, MI, and there he began performing with puppets, an avocation he pursued throughout the rest of his life. Sollner also taught in Kansas City and Hawaii before moving into another profession. In 1960 he took a position as scriptwriter/actor/director with Centron Corp. of Lawrence,KS, producing non-theatrical films for business/industry/education. He later transferred to Calvin Corp. of Kansas City, MO and continued working in the film industry until 1970 when he moved his family to Hawaii. In Hawaii he served as Dean of Instruction at Kaua'i Community College for a short time,then accepted an offer to write for The Garden Island newspaper, where he worked for 12 years as run-of-the-press reporter. In addition, he made a series of independent films on Hawaiian culture and published an alternative bi-monthly periodical "Kaua'i OFFCENTER" for five years. In 1991 "Bill" and his wife Fay moved back to Arma to care for his aged mother until she died that same year. His wife preceded him in death, July 24,2005. His life-long interest in theater led Sollner to participate at every stop in his career. Two of his play scripts won national contests and were produced in Florida and Michigan. He performed in numerous college and community theater productions. He directed the first productions of lonesco's plays at Kansas City Junior College. His work in live theater was complemented by his puppetry and productions of original work with puppets. Sollner married Yanju Chen at the United Methodist Church in Pittsburg, Ks on April 19, 2013,she survives of the home. Additional survivors include daughter, Susan K. Low of Sooke, British Columbia; a son, David B. Sollner of Yokosuka, Japan and nine grandchildren. Sollner was preceded in death by his wife, Fay and daughter, Rebecca Lea "Becky" Golding. A celebration of life will be held at a later date. Condolences may be left at www.bathnaylor.com. Arrangements are under the direction of the Bath-Naylor Funeral Home of Pittsburg, KS.

William J. "Bill" Sollner of Arma died November 11, 2017. He was born in Downs, Ks on July 28, 1925 to Dr. Anson Huey and Esther Ann Sollner, later moving to Arma, Ks where Dr. Anson H. Sollner was a dentist for many years. Bill was a 1943 graduate... View Obituary & Service Information

The family of William "Bill" J. Sollner created this Life Tributes page to make it easy to share your memories.

Send flowers to the Sollner family.