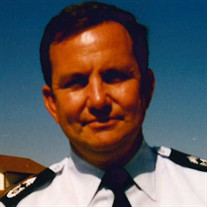 William L. "Bill" Pinamonti, Jr., 69, of Rapid City, South Dakota formerly of Frontenac, passed away on September 27, 2016. Bill was born on August 1,1947 in Pittsburg, Kansas the son of William L. Pinamonti Sr. and Alice J. Peak Pinamonti. He graduated from Frontenac High School with the class of 1965. He entered the U.S. Air Force in April of 1966 where he served in many countries including England, Germany, Libya and Turkey. He retired in 1996 as Chief Master Sergeant in Rapid City, South Dakota after 30 years of service. His last assignment was at Guantanamo Bay, Cuba. He was a veteran of the Vietnam War and the Persian Gulf War. He got his associate degree at Victorville, Ca. and a bachelor degree at Troy State University, Alabama. Bill loved his family, friends and his country and he also liked the outdoors, fishing and woodworking. He married Christine Cowdery in 1971. He is survived by his wife and son Nicholas and Mandy Peterson, grandson Cory, sister Carlotta and husband George Geisler, niece Krista and husband Steve Amershek, nephew Ryan Geisler and Kylie Parsons, great nephews Brayden and Beckett Amershek, aunts Maxine Anderson and Vi Peak and several cousins. He was preceded in death by his parents and grandparents. Memorial services will be 1 pm, Saturday, October 8, 2016 at the Friskel Funeral Home in Frontenac with Fr. Thomas Stroot officiating. Inurnment will be in the Mt. Carmel Cemetery at a later date. Condolences may be left at www.friskelfuneralhome.com. Memorials may be may to the Mt. Carmel Cemetery Fund. Services by Friskel Funeral Home Frontenac, KS.

The family of William (Bill) L. Pinamonti created this Life Tributes page to make it easy to share your memories.

Send flowers to the Pinamonti family.