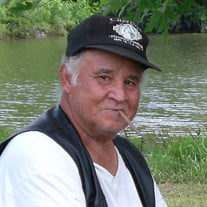 William A. Johnson, 80 of rural Cherokee, KS died Saturday April 15, 2017 at his home following an illness. He was born January 15, 1937 in Stilwell, OK the son of Frank and Mary Jane (Cudney) Johnson. On February 27, 1968 he was united in marriage to Kathleen M. Boyer in Las Vegas, NV; she survives him of the home. He served in the U.S. Air Force. Bill worked as a brick mason for many years with MidCo. He was a member of the Cherokee American Legion and the Cherokee Raritan. Additional survivors include a son Billy Johnson of Cherokee, a daughter Kristie Hannah of California; a brother Frank (Roxanne) Johnson of Dallas, TX; five sisters: Pat (Jim) Omstead of Carrollton, OK, Shirley Linam of Oswego, OK, Elain (Greg) Kirsh of Sapulpa, OK, Mary (Jim) Liman of Collinsville, OK and Pam (Vick) LaCount of Tulsa, OK, two sister-in-laws: Jean (Carl) Evans of KS, Phyllis Boyer of OR; brother-in-law Bob Boyer of Cherokee, along with 3 grandchildren and many nieces and nephews. Memorial services will be 2pm, April 20, 2017 at the Bath-Naylor Funeral Home in Weir, KS with Rev. Jamie Tickel officiating. Condolences may be left at www.bathnaylor.com. Services are under the direction of the Bath-Naylor Funeral Home Weir, KS.

The family of William "Bill" A. Johnson created this Life Tributes page to make it easy to share your memories.

Send flowers to the Johnson family.