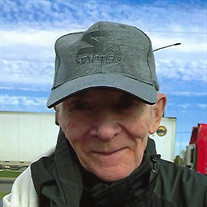 Wayne Nelson Barber 79, of Pittsburg, KS died 4:20pm Tuesday October 2, 2018 at the Medicalodge Nursing Home in Pittsburg, KS following an illness. Wayne was born April 11, 1939 in Pemberville, Ohio the son of George W. and Nola (Nelson) Barber. Wayne moved to the area from Winfield, KS and attended college in Allentown, PA. He was a veteran of the United States Army serving in Germany earning the rank of PFC. He served as Military Police. On October 14, 1961 Wayne married Claire Henderson in Springfield, MA; she survives at the home. Wayne has worked for several commercial companies including Vinylplex Inc. in Pittsburg, KS. Wayne was a member of the Frontenac Methodist Church and was known to be happily married to his wife Claire for 56 years. Survivors include his children Duane Barber and wife Tammy of Girard, KS, Doug Barber of Pittsburg, KS, Gloria Goodale and husband Larry of Claremore, OK and Kirk Barber and wife Bobbiejo of Tuscan, AZ; brother Donald Barber of Broken Arrow, OK; 4 grandchildren and 2 great-grandchildren. Wayne was preceded in death by his parents, sisters Donna Myers, Gladys Ward and a grand-daughter Nicole Beknel. Funeral Services will be 11:00am Tuesday October 9, 2018 at the Friskel Funeral Home in Frontenac, KS with Pastor Brayden Shelly officiating. Burial will follow at the Highland Park Cemetery in Pittsburg, KS. Family will receive friends 10:00-11:00am prior to the service at the funeral home. Condolences may be left at www.friskelfuneralhome.com. Arrangements and services are under the direction of Friskel Funeral Home of Frontenac, KS.

The family of Wayne Nelson Barber created this Life Tributes page to make it easy to share your memories.

Send flowers to the Barber family.