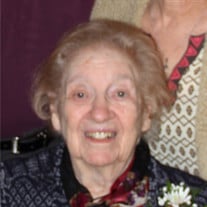 Virginia H. Wilbert of Pittsburg passed away Thursday, April 5, 2018 at her home. She was born November 15, 1917, in a farmhouse outside of Pomona, Kansas to Albert and Minnie (Beal) Albright. She attended a one room country school through the eighth grade. She moved to Topeka to live with her brother and attended Topeka High School, graduating in 1935. Subsequently she earned a degree in Political Science from Washburn University in Topeka in 1939. She taught school in Chautauqua, Kansas and Pomona. While teaching in Chautauqua she met her future husband; Lawrence Julius “Larry” Wilbert. They were married on September 19, 1942 at St. John the Evangelist Catholic Church in Kansas City, Kansas. In 1943 they moved to Camp Crowder, where Larry served in the Signal Corps of the U.S. Army prior to going overseas. Following the war they moved to Hutchinson, Kansas and then to Mission and Prairie Village, Kansas. In 1966 she and Larry moved to Pittsburg, Kansas where they founded Pittsburg Steel and Manufacturing Co. Together they operated the business until 1978, during which time Virginia served as secretary and treasurer of the company. Larry was elected and served in the Kansas State Legislature from 1980 to 1990. Virginia enjoyed living in Topeka when the legislature was in session. With her Political Science background and enthusiastic interest in local and national politics, she served as a valued advisor and partner in Larry’s political career. She was a longtime member of Our Lady of Lourdes Catholic Church of Pittsburg and an active member of the Republican Party. She was preceded in death by her loving husband and daughter Jeanette Wilbert Edwards. Survivors include daughter Marjorie Wilbert Dellasega and her husband, Mark, of Greenville, NC., son Kenneth L. Wilbert of Rock Springs, Wyoming and son-in-law Carl Edwards of Fredonia, Kansas . Also surviving are seven grandchildren: Julie Edwards Barta, Michael Edwards and Timothy Edwards, Matthew Dellasega and Melinda Dellasega Steed, Christopher Wilbert and Joshua Wilbert. There are eight great grandchildren surviving. Mass of Christian Burial will be 10:00am Monday April 9, 2018 at the Our Lady of Lourdes Catholic Church in Pittsburg, KS with Fr. David Voss as celebrant. Burial will follow at the St. Mary’s Cemetery in Pittsburg, KS. Rosary will be recited at 6:00pm Sunday April 8, 2018 at the Bath-Naylor Funeral Home in Pittsburg, KS; family will receive friends following the rosary. In lieu of flowers the family asks expressions of sympathy to be in the form of memorials to the Our Lady of Lourdes Memorial Fund and/or PSU Music Department. Friends may drop off or mail memorials to Bath-Naylor Funeral Home 522 S. Broadway Pittsburg, KS 66762. Condolences may be left at www.bathnaylor.com. Arrangements and services are under the direction of Bath-Naylor Funeral Home of Pittsburg, KS.

Virginia H. Wilbert of Pittsburg passed away Thursday, April 5, 2018 at her home. She was born November 15, 1917, in a farmhouse outside of Pomona, Kansas to Albert and Minnie (Beal) Albright. She attended a one room country school through... View Obituary & Service Information

The family of Virginia H. Wilbert created this Life Tributes page to make it easy to share your memories.

Send flowers to the Wilbert family.