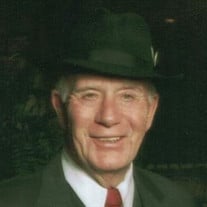 Virgil Lee “Duke” Locke, of Webb City, former resident of Frontenac, Kansas passed away Saturday, July 21, 2018 at his home. Duke was born March 18, 1936 to Stanley and Myrtle Belle (Goodhall) Locke in Frontenac, Kansas. He was a graduate of Frontenac High School. Duke joined the U.S Army after high school and served in the Korean and Vietnam War. In 1976 he graduated from the University of California, Los Angeles with a Bachelor’s degree in Business Management. Duke worked for Glacier Water services in Carlsbad, California for 15 years as the director of sales and marketing, he retired in 2003. He was a member of the Frontenac United Methodist Church. Duke served in the U.S. Army for 7 years and was also a member of the American Legion Post #43, Frontenac, Kansas and Disabled American Veterans. Duke is survived by his wife Sandra, son; Gary and wife Ann McDonald, daughter; Patricia Houlebreque, and brother; Raymond and wife Donna Locke and 5 grandchildren He was preceded in death by his parents, daughter; Robin Mullis, 5 brothers; Richard Locke, Harold Locke, Alfred Locke, Merle Locke, Jack Locke, 5 sisters; Viola Millard-Herford, Nellie Millard, Jane Millard, Virginia Baker and Patricia Coy. A graveside service will be held at 2:00 pm. Wednesday, July 25, 2018 at the Frontenac City Cemetery in Frontenac, KS. Condolences may be left at www.friskelfuneralhome.com. Memorials may be made to the Joplin Humane Society or the American Cancer Society; these may be left at or mailed to the funeral home. Arrangements are under the direction of the Friskel Funeral Home of Frontenac, KS.

The family of Virgil Lee Locke created this Life Tributes page to make it easy to share your memories.

Send flowers to the Locke family.