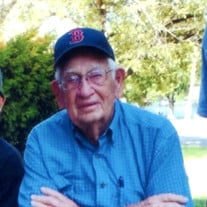 Virgil A. Buckner, 92 of Columbus, died May 27, 2018 at Medicalodges, after an illness. Born April 1, 1926, in Joplin, Mo., Virgil was the son of Otis V. and Lela (Busse) Buckner. He was a graduate of Cherokee County Community High School with the class of 1943. He was a member of the First Christian Church in Columbus and the American Legion. Virgil served in the United States Army Air Corps from April of 1944 through December of 1946. He served as a crew chief on Okinawa, servicing planes for General Douglas Mac Arthur (Bataan), General Dwight Eibenhower (Columbine), General Jimmy Doolittle (B17), The President’s Plane (Sacred Cow), Adm. Chester Nimitz (C 54) and many other V.I.P. Planes. Virgil and Harriette Gallagher were united in marriage February 16, 1946 in Columbus. He was employed 21 years by Spencer Chemical Company. He left that job in1968 to build Pixie Ann Drive In. He spent many years prospecting for gold in Colorado, New Mexico, Nevada and Arizona. He served four different terms on the Columbus city council. Virgil was preceded in death by his parents, and brother Jack Buckner. In addition to his wife Harriette of the home, Virgil is survived by his son Brent (Barbara) Buckner of Oklahoma City, Okla., sister; Roma Hadley of Orange County, Calif., grandchildren Beth Ann (Gary) Kilpatrick of Waco, Texas, Belinda (Chris) McAuliffe of Oklahoma City, Okla. Five great-grandchildren Riley McAuliffe, Reed McAuliffe, Rhett McAuliffe of Oklahoma City, Okla., Emily Kilpatrick, Cade Kilpatrick of Waco, Texas, three nephews and two nieces also survive. Graveside services will be held at 11 a.m., Thursday, May 31, at Columbus Park Cemetery in Columbus. In lieu of flowers, the family suggests memorials to the Medicalodges Activity Fund or the Keith Reeves American Legion Post #3. Friends may also leave condolences online at our web site www.bathnaylor.com Arrangements are under the direction of the Bath-Naylor Funeral Home of Columbus.

Virgil A. Buckner, 92 of Columbus, died May 27, 2018 at Medicalodges, after an illness. Born April 1, 1926, in Joplin, Mo., Virgil was the son of Otis V. and Lela (Busse) Buckner. He was a graduate of Cherokee County Community High School with... View Obituary & Service Information

The family of Virgil Albert Buckner created this Life Tributes page to make it easy to share your memories.

Send flowers to the Buckner family.