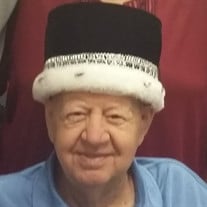 Vaughn “Buster” Maurice Durfee, Jr. 71, of Columbus, KS died at 5:06 am, Wednesday January 18, 2017 at Mercy Hospital in Columbus. Vaughn was born April 7, 1945 in Crawford, CO the son of Vaughn and Ethel (Horton) Durfee. On March 15, 1969 Vaughn married Geraldine Johnston in St. Francis, KS. Buster worked as a dairyman in Idaho, Oregon and Colorado. He worked several years at Delta Hardware in Delta, Colorado and then as a truck driver for various companies. His final job before retiring was at GW Hardware in Woodburn, Oregon. He was a longtime member and past president of the Lions Club in Delta, CO. Buster made friends everywhere he went and never met a stranger. Survivors include his wife Jerry of Columbus; children Millie Copper of Powell, WY, Nellie Dempsey of Miami, OK, Kellie Chandler and Richard Durfee both of Grove, OK, Kendra Declue of Wellington, FL; brothers Hal Durfee of Delta, CO, Roy Durfee of Gold Beach, OR, Jess Durfee of San Diego, CA; 8 grandchildren, 1 great-grandchild. Vaughn was preceded in death by his parents, a sister and a brother. Memorial Services will be 2:00 pm, Friday, January 27, 2017 at Medicalodge in Columbus. Buster loved the activities and staff at Medicalodge, in lieu of flowers the family asks expressions of sympathy to be in the form of memorials to the Medicalodge Activity Fund. Friends may drop off or mail memorials to the Bath-Naylor Funeral Home 611 S. East Ave. Columbus, KS 66725. E-mail condolences may be left at www.bathnaylor.com. Arrangements are by Bath-Naylor Funeral Home of Columbus, KS.

The family of Vaughn "Buster" Maurice Durfee created this Life Tributes page to make it easy to share your memories.

Send flowers to the Durfee family.