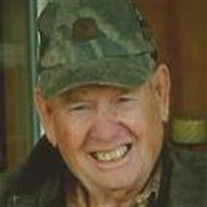 COLUMBUS, KS – Tommy Joe Mooney, 82, of rural Columbus, died April 25, 2016 at his home. He was born October 26, 1933 in Columbus the son of Samuel and Jewell Dean Soper. He had been a resident of the Columbus area his entire life and was a graduate of Columbus High School. He married Margaret Rose “Maggie” Morton on December 22, 1970 in Miami, Oklahoma and she survives at the home. Mr. Mooney was a farmer and rancher and had also worked for the Kansas Department of Transportation in the Columbus office for 30 years, retiring as the foreman. Survivors include four sons Jimmy Mooney and wife Connie of Foley, Minnesota, Dennis Mooney and wife Daisy of Scammon, Bruce Mooney and wife Lisa of Girard, and Philip Mooney and wife Melinda of Scammon, one daughter Tommie Mooney of San Diego, CA, nine grandchildren Ben Mooney, Jacob Mooney, Samuel Mooney, Nicole Mooney, Paul Mooney, Joseph Mooney, Casey Mooney, Kristy Mooney and Richard Mooney, 14 great-grandchildren Grace Mooney, Will Mooney, Leah Mooney, Anna Knoebel, Violet Knoebel, Harper Mooney, Lily Mooney, Katy Mooney, Jase Mooney, Jaxon Mooney, Dawsyn Mooney, Malei Holman, Tytus Holman and Maylee Mooney, one brother Bob Soper of Columbus, and his beloved dogs Crawdad and Buck. He was preceded in death by his parents and two grandchildren Justin Mooney and Melissa Mooney. The family will receive their friends from 6 to 8 pm, Wednesday, May 4, 2016 at the Bath-Naylor Funeral Home, 611 S. East Avenue, Columbus, KS. Friends may call anytime after 9am on Wednesday, May 4, 2016 at the funeral home. Private graveside services and burial will be Thursday, May 5, 2016 at the Edgmand Cemetery rural Columbus, KS. The family suggests expressions of sympathy in lieu of flowers be in the form of memorials to Edgmand Cemetery, rural Columbus, KS. Condolences may be left at our web site www.bathnaylor.com.

COLUMBUS, KS &#8211; Tommy Joe Mooney, 82, of rural Columbus, died April 25, 2016 at his home. He was born October 26, 1933 in Columbus the son of Samuel and Jewell Dean Soper. He had been a resident of the Columbus area his entire life and... View Obituary & Service Information

The family of Tommy Joe Mooney created this Life Tributes page to make it easy to share your memories.

Send flowers to the Mooney family.