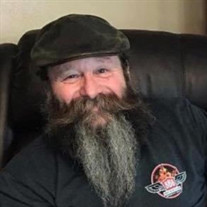 Timothy Russell Harris, 63, of Pittsburg, Kansas passed away on August 22, 2020 after a hard-fought battle with illness. Tim was born on March 10, 1957 in Joplin, Missouri, to Maxine Blanche (Young) and Thomas Orville Harris, the second of four children. He was a 1975 graduate of Pittsburg High School and attended Pittsburg State University before joining the U.S. Navy in 1976, where he served with distinction for 21.5 years. As a Machinist Mate, Tim rose from Seaman Recruit to Senior Chief Petty Officer before he was commissioned as a Chief Warrant Officer in 1993. Tim proudly served on the USS Nimitz from 1978-1982, the USS Peleliu from 1985-1990, worked as a recruitment officer from 1990-1994, and finished his service on the USS Aubrey Fitch from 1994-1997. After retiring from the Navy in 1998, Tim began exploring his passions, including riding motorcycles and traveling across the country. He was a member of the Veterans of Foreign Wars Post 534 in Joplin, MO, the VFW Post 8220 in Belton, MO, and the American Legion Post in Pittsburg, Kansas. He also finished his Bachelor of Science degree in Physics at Pittsburg State University in 2007, earning Cum Laude honors. In 2013, he met Karen Endicott, and they were married on November 13, 2019. Tim was preceded in death by his parents, Maxine and Tom and his niece, Lindsay Kate Perez. He is survived by his wife Karen; stepmother Gay Harris; uncle George (Carrie) Harris; aunt Margie Young; siblings Lee Ann (Jeff) Perez, Chris (Rachel) Harris, Jennifer (Nichole) Harris-Wicks; his nieces Hillary (Mark) Woolsey, Chloe Harris, Abby Harris; nephew Gabe Harris; great nieces and nephews Avery (Carlos) Perez, Simon Woolsey, Gavin Woolsey, Grayson Woolsey; great-great nephews Isaac and Cameron; step-daughter Kourtney (Caden) Yantis, and his fur “boys” Isaac and Newton. He was also incredibly excited to become “Popeye” to his granddaughter, Lincoln Yantis, in a few months. Tim will be remembered for his love and vast appreciation of music, especially rock, his zest for life, his sense of humor, and his unfailing positive energy. A Celebration of Life will be from 3-6:00pm Sunday September 6, 2020 at the Frisco Event Center in Pittsburg, KS. A private burial will be held at a later date at the Ft. Scott National Cemetery in Fort Scott, KS. In lieu of flowers the family asks expressions of sympathy to be in the form of memorials to the SEK Humane Society and/or American Cancer Society. Friends may drop off or mail memorials to Bath-Naylor Funeral Home 522 S. Broadway Pittsburg, KS 66762. Condolences may be left at www.bathnaylor.com. Arrangements and services are under the direction of Bath-Naylor Funeral Home of Pittsburg, KS.

Timothy Russell Harris, 63, of Pittsburg, Kansas passed away on August 22, 2020 after a hard-fought battle with illness. Tim was born on March 10, 1957 in Joplin, Missouri, to Maxine Blanche (Young) and Thomas Orville Harris, the second of... View Obituary & Service Information

The family of Timothy Russell Harris created this Life Tributes page to make it easy to share your memories.