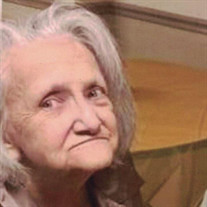 Theresa Youvon Plotner, 74, of Arma, KS, died on Thursday, April 28, 2022 at Arma Health and Rehab in Arma, KS. She was born March 11. 1948 in Independence, KS, the daughter of Harold Eugene and Alma Lois (Wheeler) Plotner. She attended school at a one room rural school in Southeast, KS. After high school she earned a secretary certificate from the Job Corp in Marquette, MI. Theresa was a dietary technician for Sunset Manor for 20 years. She enjoyed quilting, sewing baking, listening to country and classical music and crossword puzzles. Spending time with her grandkids was always the highlight of her day, she loved them dearly. She is survived by her daughter; Keturah Plotner and spouse Danny Howard Jr. of Pittsburg, KS brother; Robert Plotner of Liberal, MO, four grandchildren; Zoe Howard and Mysti Howard of Pittsburg, KS, Felisha Plotner of Arma, KS, Vincent Plotner of Pittsburg, KS, three great-grandchildren and several nieces and nephews. Theresa is preceded in death by her parents, son Donn Plotner and seven siblings. Funeral Services will be held at 1 PM on Wednesday, May 4, 2022 at the Bath-Naylor Funeral Home of Pittsburg. Memorials may be made to the Alzheimer’s Association; these may be dropped off or mailed to the funeral home, 522 S. Broadway Pittsburg, KS 66762.

The family of Theresa Youvon Plotner created this Life Tributes page to make it easy to share your memories.

Send flowers to the Plotner family.