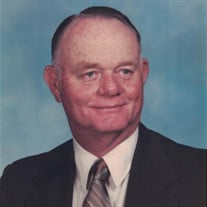 COLUMBUS, KS - Ted L. Eberhard, 89, of Columbus, passed away May 20, 2017 at Mercy Hospital in Joplin, Missouri. He was born September 30, 1927 in Beaumont, TX the son of Oliver (Sam) and Zelpha (Jones) Eberhard. He married Mary J. Cole in 1949 at First Methodist Church in Joplin, MO. Ted was a manager at the Stock Yard Feed in Joplin, MO and a sales manager at Ragland Mills, Neosho, MO, he retired from both jobs. He served in the Navy, and was stationed on the U.S.S Curtis Ship. He pitched baseball for the Yankee organization and the Former Joplin Miners in 1948. Ted enjoyed training bird dogs, hunting, fishing, coaching American Legion Baseball, mowing grass, growing tomatoes and sharing them with many friends and family. One of his greatest accomplishments was coaching American Legion Baseball and out of all his coaching 40+ ball players received college scholarships or signed professional. Survivors include his wife of 67 years, one son Joe Eberhard of Fort Smith, AR, one daughter Melinda (Carl) Helwig of Rural Columbus, KS, 2 grandchildren, Chris (Lucinda) Eberhard of Greenwood, AR, Katie (Jim) Battreal of Little Rock, AR, 4 great-grandchildren, Landon and Maddie Kate Battreal, Bo Eberhard, and Hunter White. He was preceded in death by his parents, one brother Floyd Eberhard, one sister Twyla Hughes. Memorial services will be 3 pm Saturday, May 27, 2017 at Royal Heights United Methodist Church, 1612 Euclid Ave, Joplin, MO 64801 with Rev. Gary Thomas, officiating. Inurnment will be at the Edgmand Cemetery in Cherokee County, Tuesday, May 30, 2017 at 2 p.m. A memorial has been established to the Royal Heights United Methodist Church, memorials may be sent to the address above. Condolences may be left at our web site www.bathnaylor.com Arrangements are by the Bath-Naylor Funeral Home & Crematory, 611 S. East Avenue, Columbus, KS 66725.

The family of Ted L. Eberhard created this Life Tributes page to make it easy to share your memories.

Send flowers to the Eberhard family.