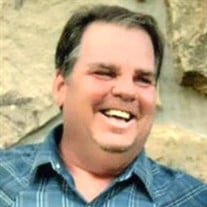 T.J. Ridgway 56, of Weir, KS died 3:00pm Wednesday May 2, 2018 at his home following a short illness. T.J. was born March 30, 1962 in Oswego, KS the son of John and Dixie (Armstrong) Bohn. T.J. was a lifelong resident of the area and graduated from Pittsburg State University earning a degree in Business Administration. He also was a Veteran of the United States Airforce serving from 1979-1982. T.J. was married to Debra Witt on June 18, 1989 in Pittsburg, KS; she survives at the home. T.J. worked for himself in the Rental Property Business. He was a member of the Church of God in Christ Church in Pittsburg, KS; a member of the Girard American Legion; active Harley Davidson Motorcycle Rider and PSU Alumni. Survivors include his wife Debra Witt of Weir, KS; children Axel Bohn-Witt of Weir, KS, Ashley Bohn-Witt of Pittsburg, KS and Megan Theis of Pittsburg, KS; step-daughter Heather Witt-McGinn and husband Chad of Joplin, MO; mother Dixie Armstong Heflin of Pittsburg, KS; siblings Tommy Ridgway of Pittsburg, KS, Teresa McClure of Pittsburg, KS, Tammy Bohn and husband David Drake of Arcadia, KS; grandchildren Kendall, Abigail, Annabelle, Kodi and Kinsey and many other close friends, nieces and nephews. T.J. was preceded in death by his son Jason Bohn Witt and his father. Funeral Services will be 6:00pm Monday May 7, 2018 at the Bath-Naylor Funeral Home with Pastor Walter Simpson officiating. Private burial will be at a later date. Friends may call the funeral home after 2:00pm Monday. In lieu of flowers the family asks expressions of sympathy to be in the form of memorials to the Bikers’ Against Child Abuse. Friends may drop off or mail memorials to the Bath-Naylor Funeral Home 522 S. Broadway Pittsburg, KS. Condolences may be left at www.bathnaylor.com. Arrangements and services are under the direction of Bath-Naylor Funeral Home of Pittsburg, KS.

The family of T. J. Ridgway created this Life Tributes page to make it easy to share your memories.

Send flowers to the Ridgway family.