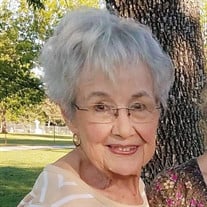 Shirley A. Postai has joined her husband Francis B. Postai and her son Mark F. Postai in a better place on October 17, 2019. Shirley was born in Kansas City, Missouri on November 2, 1928 to Wilma Spellman King and Claude E. King. She was raised in Ft. Scott, Kansas where she graduated high school and attended Ft. Scott Junior College. She transferred to Kansas State Teacher’s College (now known as Pittsburg State University). She was a member of Alpha Sigma Alpha. While in school, Shirley met her future husband, Francis B. Postai. They were married at Our Lady of Lourdes Catholic Church in August of 1948. They had four children: Pamela, Mark, Paula and Julie. For over 25 years Shirley worked as a medical assistant to Dr. George Pogson and later Dr. Donald Holsinger. She was much loved by their patients and known for her extraordinary care, compassion and kindness. She volunteered for the Meals on Wheels program, and also helped establish Back Packs for Children, along with volunteer work in teaching literacy to adults in the community. She loved her family, her cat Baby Girl, antiquing and was a voracious reader of books. Shirley had great friends and amazing caregivers at Medicalodges, Butler, Missouri that she loved and who loved her. She is preceded in death by her husband Francis and her son Mark. She is survived by her three daughters and their spouses: Pamela and Timothy Greninger of Joplin, Missouri, Paula Postai and Cliff Wiegand of Jonesborough, Tennessee, and Julie and Bob Piotrowski of Ft. Scott, Kansas. She is also survived by her daughter-in-law Linda Postai Hughes of Placitas, New Mexico. Additionally Shirley had eight grandchildren: Aimee Rigsby and Jessica Neville of Joplin, Missouri, Terra Buche Stotler of Raymore, Missouri, Ethan Buche of Girard, Kansas and Bob, Tom, Penka, and Stefka Wiegand of Jonesborough, Tennessee. She is also survived by nine great grandchildren. Pall bearers are as follows: Cliff Wiegand, Bob Piotrowski, Tim Greninger, Paul Kahn, Chad Stotler and Ethan Buche. Honorary pall bearers are Don Buche and Elijah Neville. Funeral Services will be 10 am on Tuesday, October 22, 2019 at the Bath-Naylor Funeral Home in Pittsburg, KS, with Rev. Lindsey Clarke, officiating. Interment will follow at Highland Park Cemetery, Pittsburg, KS. The family will receive friends at 6 pm Monday, October 21, 2019 at the Bath-Naylor Funeral Home, 522 S. Broadway Pittsburg, KS. In lieu of flowers, donations may be sent to the Southeast Kansas Humane Society. She will be greatly missed but without a doubt never forgotten. Condolences may be left at our website www.bathnaylor.com. Arrangements are under the direction of Bath-Naylor Funeral Home.

Shirley A. Postai has joined her husband Francis B. Postai and her son Mark F. Postai in a better place on October 17, 2019. Shirley was born in Kansas City, Missouri on November 2, 1928 to Wilma Spellman King and Claude E. King. She was raised... View Obituary & Service Information

The family of Shirley Ann Postai created this Life Tributes page to make it easy to share your memories.

Shirley A. Postai has joined her husband Francis B. Postai and...

Send flowers to the Postai family.