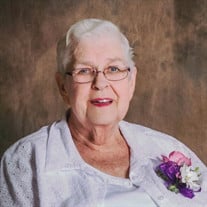 Shirley J. Munsell 83, of Pittsburg, KS passed away 5:10pm Thursday November 30, 2017 at the Medicalodge Nursing Home in Frontenac, KS following an illness. Shirley was born February 17, 1934 in Pittsburg, KS the daughter of Chester “Lefty” and Gladys Marie (Brown) Pryor. She was a lifelong resident of the area and a graduate of Pittsburg High School in 1952. On October 9, 1954 Shirley married Chesley Munsell at the Our Lady of Lourdes Catholic Church in Pittsburg, KS; he preceded her in death on May 14, 2015. Shirley attended the Lighthouse Tabernacle Church in Pittsburg, KS; she was a member of TOPS; loved bingo and her family was the most important thing in her life. Survivors include her children Chuck Munsell and wife Karen of Pittsburg, KS, Bev Wright and companion Mike Weinberg of Pittsburg, KS and Monica Hatfield-Blake of Wichita, KS; siblings Connie Phillips of Pittsburg, KS, Mike Pryor of Pittsburg, KS and Janie Collins of Girard, KS; grandchildren Eric Munsell, Mike Munsell, Adrian Murray, Corbin Murray, Haven Hatfield and Bran Dan Hatfield; in addition 12 great-great grandchildren. Shirley was preceded in death by her parents, husband, siblings Terry Pryor, Chet Pryor and Donna Flater. Funeral Services will be 10:00am Monday December 4, 2017 at the Bath-Naylor Funeral Home in Pittsburg, KS with Pastor Daryl Gaddy officiating. Burial will follow at the Highland Park Cemetery in Pittsburg, KS. Family will receive friends from 7-8:00pm Sunday December 3, 2017 at the Bath-Naylor Funeral Home in Pittsburg, KS; friends may call after 12:00pm Sunday. In lieu of flowers the family asks expressions of sympathy to be in the form of memorials to the Lighthouse Tabernacle Church. Friends may drop off or mail memorials to Bath-Naylor Funeral Home.

The family of Shirley J. Munsell created this Life Tributes page to make it easy to share your memories.

Send flowers to the Munsell family.