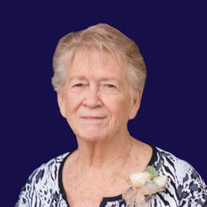 Shirley Carney, of Raytown, Missouri, passed away on October 22, 2020, at her home following a two-year struggle with metastatic lung cancer. She was sustained by the love of her family and her strong faith in Jesus Christ. Shirley was born on January 5, 1933, in Pittsburg, Kansas. The daughter of Cornelius “Neil” and Luetta (Fields) Bolinger, she graduated from Pittsburg High School in 1951 and soon relocated to Kansas City to work for Harzsfeld’s Department Store. Shirley married Pittsburg, Kansas, native James “Royce” Carney in 1955. The couple settled in Kansas City/Raytown, raised their close-knit family and recently celebrated a milestone 65th-wedding anniversary. Shirley’s priority and love centered around her babies until the very end. In the ’70s—and for many years beyond—she parlayed that passion into a home business delivering childcare for children of several schoolteachers in the Raytown School District. The family dinner table was considered sacred ground for Shirley. She prepared daily meals with an artist’s touch, coloring ordinary menu items with impeccable seasoning to always produce unmatched flavors. Kitchen prep time and the daily table exchange can be credited for her family’s continued connectedness. Shirley was blessed to experience a host of family meals at that very same table during her final days. Shirley was preceded in death by her parents and in-laws (a selfless caregiver to her mother and mother-in-law in her home), infant son James Daniel “Danny” Carney and grandson and heart’s delight, Trent Asmussen. She is survived by her husband Royce Carney of the home and four children: Emily “Beth” Munter of Grain Valley, Missouri; Janet Harrison (Taylor) of Lee’s Summit, Missouri; Jeffrey Carney (Laurie) of Kansas City, Missouri; and Steven Carney (Tara) of Mesa, Arizona. Shirley was a proud and beloved “Grammy” to seven wonderful adult grandchildren and nine great-grandchildren. A family graveside memorial service is planned for Wednesday, October 28, 2020 at 2:00 p.m. at Highland Park Cemetery in Pittsburg, Kansas. In lieu of flowers, the family kindly suggests a memorial gift in Shirley’s honor to Ronald McDonald House Charities of Kansas City. Please visit https://rmhckc.org/donate/

Shirley Carney, of Raytown, Missouri, passed away on October 22, 2020, at her home following a two-year struggle with metastatic lung cancer. She was sustained by the love of her family and her strong faith in Jesus Christ. Shirley was born... View Obituary & Service Information

The family of Shirley Carney created this Life Tributes page to make it easy to share your memories.

Shirley Carney, of Raytown, Missouri, passed away on October...

Send flowers to the Carney family.