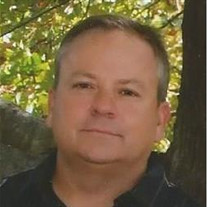 PITTSBURG, KS – Scott Robert VanBecelaere, 46, of Pittsburg, died December 25, 2016 at Via Christi Hospital in Pittsburg, KS. He was born November 18, 1970, in Pittsburg, the son of Fred and Treva Guthrie VanBecelaere. He had been a lifelong resident of Pittsburg. He graduated from St. Mary’s Colgan High School in Pittsburg with the class of 1989. He graduated from Pittsburg State University with a Bachelor of Science Degree in Construction Management. Scott married Deborah Diane Schnackenberg on September 22, 1995 at Our Lady of Lourdes Catholic Church in Pittsburg, KS. She survives at the home in Pittsburg. He was a Heavy Equipment Operator and a partner in the family business with his father at Freddy Van’s Construction of Pittsburg his entire working career. Membership was held in Our Lady of Lourdes Catholic Church in Pittsburg and he was an avid Harley-Davidson Motorcycle enthusiast. Survivors, in addition to his wife Diane, of the home; include his parents Fred and Treva VanBecelaere, of Pittsburg; one son Zach VanBecelaere, of Pittsburg ;and one daughter Chloe VanBecelaere, of the home; one brother Rusty VanBecelaere and his wife Cindy; and one sister Julie and partner Jody Elsasser, of Pittsburg. He is also survived by parents-in-law Roger and Nadine Schnackenberg, of Shell Knob; brother in-law R.C. Schnackenberg and his wife Jean Schnackenberg, of Kauai; sister in-law Shelly Gannaway and her husband Bill, of Webb City; sister in-law Heather Roderique and her husband John, of Webb City; as well as several nieces and nephews. Mass of Christian Burial will be 10 AM Friday December 30, 2016, at Sacred Heart Catholic Church in Frontenac, with Father Thomas Stroot as celebrant. Burial will be in the Highland Park Cemetery in Pittsburg. The parish rosary will be recited at 6 PM Thursday December 29, 2016, at the Bath-Naylor Funeral Home, 522 S. Broadway in Pittsburg. The family will receive their friends after the rosary service until 8 PM. A memorial has been established to the Zach and Chloe VanBecelaere educational fund in care of the funeral home. Condolences may be left for the family at our web site www.bathnaylor.com.

PITTSBURG, KS &#8211; Scott Robert VanBecelaere, 46, of Pittsburg, died December 25, 2016 at Via Christi Hospital in Pittsburg, KS. He was born November 18, 1970, in Pittsburg, the son of Fred and Treva Guthrie VanBecelaere. He had been a lifelong... View Obituary & Service Information

The family of Scott Robert VanBecelaere created this Life Tributes page to make it easy to share your memories.

Send flowers to the VanBecelaere family.