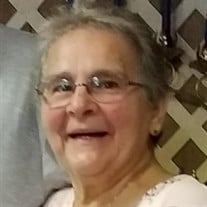 Sandra Louise Haymaker Smith of Pittsburg, KS died Tuesday January 11, 2022 at the Ascension Via Christi Hospital in Pittsburg following a sudden illness. She was born April 21, 1947 in Baxter Springs, KS the daughter of Marvin and Josephine (Savute) Sills. On August 5, 1967 she was united in marriage to Cecil “Butch” Haymaker, he preceded her in death on September 21, 1978. She married Gary Smith on July 18, 2020 in Miami, OK; he survives her of the home. Sandra was a secretary at Eagle Picher on C Street in Joplin, MO for over 25 years. She then worked at Celltron in Galena, KS for several more years before retiring. She enjoyed line dancing, cooking, gardening and traveling. A newly found love was the lake, where she would watch the birds & wildlife and even caught her very first fish two years ago, but her biggest love was spending time with her family, especially the grandkids. Additional survivors include a daughter Andra (Frank) Fontaine of Pittsburg; a step-daughter Kim (Brian) Massey of Carl Junction, MO, step-son Geoff (Angie) Smith of Webb City, MO; five siblings: Joanne Garrett of Joplin, MO, Carol Johnson of Houston, TX, Frank Sills of Coffeyville, KS, Marvin Sills of Baxter Springs, KS and Linda Meredith of Reed Springs, MO; three grandchildren: Kenny, Allie and Joey Fontaine and numerous nieces and nephews. She was preceded in death by her parents, husband Cecil “Butch” Haymaker and a brother Tommy Sills. Memorial services will be 2 pm, Friday January 14, 2022 at the Bath-Naylor Funeral Home of Pittsburg. The family will receive friends from 1pm until service time. Burial will be in the Baxter Springs Cemetery at a later date. Condolences may be left at www.bathnaylor.com. Memorials may be made to Andra Fontaine and will be distributed to several local charities, these may be left at or mailed to the funeral home. Services are under the direction of the Bath-Naylor Funeral Home 522 S. Broadway, Pittsburg, KS 66762.

Sandra Louise Haymaker Smith of Pittsburg, KS died Tuesday January 11, 2022 at the Ascension Via Christi Hospital in Pittsburg following a sudden illness. She was born April 21, 1947 in Baxter Springs, KS the daughter of Marvin and Josephine... View Obituary & Service Information

The family of Sandra Lousie Haymaker Smith created this Life Tributes page to make it easy to share your memories.