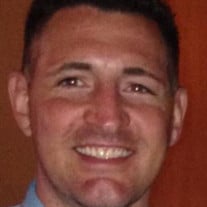 Ryan Eugene Beachner, 36, of Frontenac, passed away on October 26, 2017. Ryan was born on December 14, 1980 in Fort Scott, Kansas to Karen (Krumsick) Gorentz and Gary Beachner. He attended Frontenac Schools and graduated from St. Paul High School in 1999. He graduated from Pittsburg State University with a Bachelor’s in Automotive Technology and was currently employed at Sharp’s Auto Body in Pittsburg. Ryan loved restoring antique cars and had a true passion for artistry and music. He also loved the outdoors, nature, fishing, and animals. Survivors include his parents, Bob (Hippy) and Karen Gorentz, Frontenac, KS and Gary and Kim Beachner, Parsons, KS. He is also survived by family members, Kayler Smith, Mia Beachner, Ira Andersen-Beachner, Kaleigh Hobbs (Justin), Nathan Beachner, Cory Beachner (Kallie), and Craig Beachner. Additional survivors include paternal grandparents, Corky and Alice Beachner, Parsons, a niece and nephew, as well as many aunts, uncles, and cousins. He was preceded in death by his maternal grandparents, Bob and Regina Krumsick, Frontenac. Mass of Christian burial will be celebrated on Tuesday, October 31 at 10:00AM at Sacred Heart Catholic Church, Frontenac. The family will reside at his mother’s home. In lieu of flowers, donations may be made to the Ryan Beachner Memorial Fund for his children. Memorials can be left at or mailed to Friskel Funeral Home 230 E. McKay Frontenac, KS 66763. Condolences may be left at www.friskelfuneralhome.com. Arrangements are under the direction of Friskel Funeral Home.

The family of Ryan Eugene Beachner created this Life Tributes page to make it easy to share your memories.

Ryan Eugene Beachner, 36, of Frontenac, passed away on October...

Send flowers to the Beachner family.