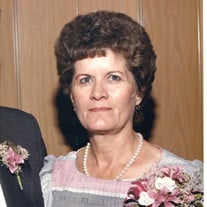 Rose Marie Stanley 82, of Frontenac, KS passed away at her home on October 4, 2016 following a sudden illness. Rosie was born October 5, 1933 in Yale, KS the fourth child and only daughter of John and Mildred (Ward) Gintner. On March 2, Rosie married the love of her life Douglas L. Stanley in Miami, OK; he preceded her in death on January 8, 2015, Rosie worked for Southwestern Bell Telephone as an operator from 1950 until the position was eliminated in 1979. She later worked for the Frontenac School District in the cafeteria where she enjoyed being around the students until she retired in 1997. Her greatest pride and joy was her family, being from Frontenac and was known as a die hard Frontenac Raiders football Fan. Rosie didn’t miss a Raiders football game from 1947 until 1994 when she broke her ankle and only missed a few since. Survivors include her daughter Cindy Schwalm and husband Wayne of Osawatomie, KS, Douglas Stanley and wife Billie of Cherokee, KS; sister in-law and brother in-law Glenda and Mike Pasini; grandchildren Sara and Tanner Schwalm, Elaine Merando, Taylor Stanley, MaKayla and Bryan Buffington, a brother Joe Gintner of Frontenac, KS, several nieces and nephews Tim, Mary (Johnny), Terry, Janelle (Mike), Steve (Patty), J.J., Liddy, Hattie, Ashton (Andrew), Luton and Libby, several cousins and several past and present daycare kids that she loved. Rose will be deeply missed by all who knew her. Graveside Burial Rights will be 10:00am Monday October 10, 2016 at the Frontenac City Cemetery in Frontenac, KS with Pastor Martha McDougal officiating. Family will receive friends from 6-7:00pm Sunday October 9, 2016 at the Friskel Funeral Home in Frontenac, KS; friends may call after 12:00pm Sunday. In lieu of flowers the family asks expressions of sympathy to be in the form of memorials to the Douglas L.and Rose Marie Scholarship Fund. Friends may drop off or mail memorials to Friskel Funeral Home 230 E. McKay Frontenac, KS 66763. E-mail condolences may be left at www.friskelfuneralhome.com. Arrangements and services are under the direction of Friskel Funeral Home of Frontenac, KS.

Rose Marie Stanley 82, of Frontenac, KS passed away at her home on October 4, 2016 following a sudden illness. Rosie was born October 5, 1933 in Yale, KS the fourth child and only daughter of John and Mildred (Ward) Gintner. On March 2, Rosie... View Obituary & Service Information

The family of Rose Marie Stanley created this Life Tributes page to make it easy to share your memories.

Rose Marie Stanley 82, of Frontenac, KS passed away at her home...

Send flowers to the Stanley family.