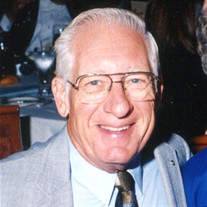 Dr. Ronald Clarence Albright 82, of Weir, KS died 4:04am Wednesday January 24, 2018 at the Via Christi Village in Pittsburg, KS following an illness. Ronald was born February 15, 1935 in Topeka, KS the son of Clarence Beale and Mary (Gutsch) Albright. Ronald was born and raised in Topeka, KS and was a graduate of Topeka High School in 1953. Later he earned a B.S. Degree from Washburn University in 1957. Ronald was in the Airforce Reserves while going to Dental School at UMKC when he was called to active duty during the Cuban Missile Crisis. He later graduated from Dental School in 1966 from UMKC. He moved to Pittsburg area in 1971 after graduation specializing in Orthodontics where he has been a resident ever since. In May of 1959 Ronald married Shirley Jean (Christy) in Leavenworth, KS; she preceded him in death in April of 1981. In 1982 Ronald married Bonnie E. Myers in Topeka, KS; she survives at the home. Ronald worked as an Orthodontist for nearly 30 years before he retired in 1999. He was a member of the Nazarene Church in Pittsburg, KS; active with the Gideon’s; volunteered with jail ministries; Habitat for Humanity; was known as an outdoorsman; loved to fish; lover of animals; gardening; loved his family and was known to be generous without the recognition. Survivors include his wife; children Drew Albright and wife Sally of Bentonville, AR, Lois Salmon of Phoenix, AZ, Larry Myers and wife Diane of Plains, KS, Greg Myers and wife Letha of McPherson, KS, Gayle McCoy of Topeka, KS, Bryce Myers and wife Cecilia of Catoosa, OK, Kay Myers of Topeka, KS; great-aunt Virginia Wilbert of Pittsburg, KS; 15 grandchildren; 11 great-grandchildren; 1 on the way and 1 great-great-grandchild. Ronald was preceded in death by his parents, first wife, grandson Kevin McCoy and a brother Robert G. Albright. Funeral Services will be 2:00pm Monday January 29, 2018 at the Pittsburg Nazarene Church in Pittsburg, KS with Pastor Jim Sukraw officiating. Burial will follow at the Garden of Memories Cemetery in Pittsburg, KS. Family will receive friends from 4-7:00pm Sunday January 28, 2018 at the Bath-Naylor Funeral Home in Pittsburg, KS; friends may call after 12:00pm Sunday. In lieu of flowers the family asks expressions of sympathy to be in the form of memorials to the Senior Adult Ministries Primetime Pitt Naz and/or SEK Humane Society. Friends may drop off or mail memorials to the Bath-Naylor Funeral Home 522 S. Broadway Pittsburg, KS 66762. E-mail condolences may be left at www.bathnaylor.com. Arrangements and services are under the direction of Bath-Naylor Funeral Home Pittsburg, KS.

The family of Dr. Ronald Clarence Albright created this Life Tributes page to make it easy to share your memories.

Send flowers to the Albright family.