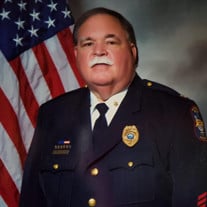 Roger Michael Rajotte, 65, formally of Pittsburg and Coventry, RI gained his angel wings on Friday, February 26, 2021 at his home in Ft. Myers, FL. He was born August 1, 1955 in Warwick, RI, the son of Roger E. and Christina M. (Bartley) Rajotte. Roger came to Kansas with one of his longtime friends to attend Kansas Teachers College. There he was introduced to his soulmate on a blind date. On October 7, 1978, Roger married the love of his life, Cheryl A. Krone in St. Paul, KS, she resides at the home. He was a member of the St. Johns XIII Catholic Church in Fort Myers, FL. He was a proud member of the Knights of Columbus and was a 4th degree knight. Roger was a police officer for 33 years. He worked as an assistant police chief in Girard and Frontenac Police as a dispatcher. He later retired from the Pittsburg police department as Deputy Chief after 25 years of service. Roger, during his career with Pittsburg police department served as the Police reserves advisor, fleet manager, initiated the Citizens Academy and was instrumental working with community members on the K-9 program. He served on the Little Balkans committee working with various agencies. Additionally, he loved helping with the Special Olympics. He served in the United States Navy. Roger is survived by his wife, two daughters; Amanda (Curtis) Rajotte-Dohle of Pittsburg, KS, Kristin Rajotte and fiancé Christopher Owen of Farlington, KS, sister Charlene Rajotte -Leveillee of RI, four grandchildren; Evan Rajotte of Joplin, MO, Autumn Bryant of Pittsburg, KS, Alana Bryant of Farlington, KS and Trevor Pepper of Pittsburg, KS. His dog, Bruin, was a source of joy and entertainment during the last 3 years. He was preceded in death by his parents, grandparents, infant sister Donna and infant brother Raymond. Mass of Christian Burial will be held at 1 pm, Thursday, March 4, 2021 at Our Lady of Lourdes Catholic Church in Pittsburg with Father Jerome Spexarth as celebrant. Following the service we will precede to the Pittsburg State Veterans Memorial Amphitheater, where the Police Honor Guard will present their honors. Memorials may be made to Pittsburg K-9 Unit; these may be left at or mailed to the funeral home. Services and arrangements are under the direction of the Bath-Naylor Funeral Home 522 S. Broadway Pittsburg, KS. Condolences may be left at www.bathnaylor.com.

The family of Roger Michael Rajotte created this Life Tributes page to make it easy to share your memories.

Send flowers to the Rajotte family.