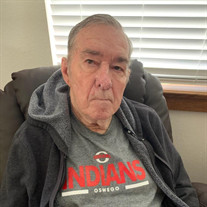 Robert D. Lumsden, age 82, of Columbus, KS passed away Wednesday, January 5, 2022 at 8:30 pm while living at Autumn Place in Columbus, KS following an illness. Arrangements for celebration of his life will be private and will be held at a later date by the family. The family is being served by Bath-Naylor Funeral Home of Columbus, KS. Robert was born in Detroit, Michigan on January 24, 1939, the son of Donald and Josephine (Geiger) Lumsden. On February 7, 1959 he married Beverly Jean Bailey in Detroit, Michigan. When Robert’s family was young, he enjoyed many years of downhill skiing and boating at their cabin near Hubbard Lake, Michigan. His boating memories continues at Rainbow Lake when their family moved there in 1979. He enjoyed woodworking on the side and was meticulous about his yard. After retiring from Central Michigan Lumber in 1988, Robert did odd handyman jobs until they moved to The Villages, Florida in 2004 where he was an avid golfer and took pleasure in all the amenities that the retirement community offered. As his illness progressed, they moved to Columbus, KS to be closer to family in February 2021. He is survived by his wife Beverly Lumsden; his children: Laura and Chris Coombs, Karen and John Weller and Kathy and Jeff Price; grandchildren Jason Coombs, Matt and Beth Fowler, Jenn and Greg Morrison Megan and Jack Versau, Josh Weller, Jordan and Haley Price and Alex Price; great-grandchildren: Jayden Coombs, Timothy and Lydia Fowler, Ava Morrison, Johnny Weller and Leighanna and Raelynn Price. He is also survived by his siblings Marilyn and Cecil Sypolt, Kathy and Russel Lumsden, brother-in-law Robert Smilie and many nieces and nephews. Robert was preceded in death by his father and mother, Donald and Josephine and his sister Susan Smilie.

Robert D. Lumsden, age 82, of Columbus, KS passed away Wednesday, January 5, 2022 at 8:30 pm while living at Autumn Place in Columbus, KS following an illness. Arrangements for celebration of his life will be private and will be held at a later... View Obituary & Service Information

The family of Robert D. Lumsden created this Life Tributes page to make it easy to share your memories.

Send flowers to the Lumsden family.