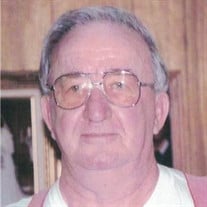 Robert L. "Bob" Brumback, 82, of Columbus, Ks died January 1, 2018, at his home. Bob was born September 21, 1935 to William and Mary Brumback. Robert L. "Bob" married Janene Robinson on December 24, 1957 in the Calvary Baptist Church in Columbus, Ks. Bob was employed by the Co-op in Columbus and then made his career at the Kansas Ammunition Plant in Parsons, Ks. Bob was a member of the Calvary Baptist Church, where he was saved on October 17, 1999. Bob enjoyed gardening, hunting and fishing. He loved to dance, no one could jitterbug like mom and dad. His wife of 50 years and dance partner, Janene, preceded him in death on July 15, 2008. Bob is survived by two daughters; Lorri Guison and husband Steve of Scammon, Ks and Lesa Schroeder and husband Gaylan of Severy, Ks; a son Robert David Brumback of Riverton, Ks; seven grandchildren: Tim Hill, Christopher Buckner, Kacy Schroeder, Gina Harvey, David Brumback, Jewel Schroeder and Jaret Brumback; and four great grandchildren. He also left behind his four-legged companion, Fritzie, who along with us will always miss him. Condolences may be sent to www.bathnaylor.com. Arrangements are by Bath-Naylor Funeral Home of Columbus, KS.

The family of Robert L. Brumback created this Life Tributes page to make it easy to share your memories.

Send flowers to the Brumback family.