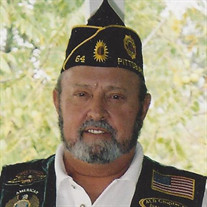 Bob (Taz) Peternell On Tuesday morning, December 5th, 2017 our father and best friend, Robert Eugene Peternell passed from this earthly world and into God’s arms. He was born to John and Jennie (Saia) Peternell in Franklin, Kansas on September 6th, 1941. As a child he served as an Alter Boy in the local Catholic Church, and later graduated from Arma High School in 1959. Bob enlisted in the Army and served in the Kansas National Guard from Jan 15, 1961 to July 14, 1961, receiving an honorable discharge upon his departure from the service. Bob worked as a local pipefitter and welder with local 664 for B.F. Goodrich from 1970 to 1986, at which time the company closed. Bob then worked for Benso Refrigeration until retirement. After retiring, Bob returned to work, this time for himself opening, operating and eventually becoming known throughout the United States for his array of Italian foods called the Peternelli Sausage Company. Bob married Antionnette Penrod in 1965 at St. Bridges Catholic Church in Scammon, Kansas. Bob had 2 girls, Lisa M. Peternell More, and Tina M. Peternell Gantt. Bob was preceded in death by his mother, and father. Bob leaves behind his wife, Antionnette Peternell of the home, Lisa More (daughter) and husband Chip More of Pleasanton, Kansas, and Tina M. Gantt and husband Larry Gantt of Scammon, Kansas. Bob also leaves behind seven grandchildren, & six great-grandchildren. The seven grandchildren are Blynn Hill and wife Kayla of Fort Scott, Kansas, Ashley Hill Boddy and husband Jason of Pleasanton, Kansas, Austin More Hill of Kansas City, Abigail M. More of Pleasanton, Kansas, Kaitlyn More of Pleasanton, Kansas. Kayla McManis Fox and husband Nick of Roseland, Kansas. Tatum McManis of Bentonville, Arkansas. The six great grandchildren are Landon Hill, Maylynn Hill of Fort Scott, Kansas, Isabella Boddy, Madalyn Boddy of Pleasanton, Kansas, Braylea Fox, Leighton Fox of Roseland, Kansas. Bob’s passions and hobbies outside of his family were his sausage making, woodworking, motorcycle, and his corvette. Bob was always telling stories of his youth, his family, his love for his country, and the many veterans who served. Bob was a past member of the Masonic Lodge, Scottish Rite, and Mirza Shriners of Pittsburg, Kansas. Bob was also highly involved with the American Legion, and was a past Director of the American Legion Riders of the Cherokee Post in Cherokee, Kansas. Bob was also Past Director as well as a Charter Member American Legion Riders in Pittsburg, Kansas. Bob was also one of the first 45 members to join the Kansas Patriot Guard, and his love for his country and veterans was evident throughout his entire life. Funeral services will be 2pm Saturday, December 9, 2017 at Bath-Naylor Funeral Home in Pittsburg, Ks. Family will receive friends from 1pm-2pm before the service at the funeral home. The funeral procession will be a “Last Ride” led by the Kansas Patriot Guard and will continue from the Bath-Naylor Funeral Home to his final resting place among family at the Garden of Memories Cemetery in Frontenac, Kansas. Pallbearers are Harold White, Ray Saia, Joe Carlson, Balta Guzman, Don Wright, Don Benson. Honorary Terry Fleury and Bill McManis Jr. Bob will be passionately missed by all family and friends; however, we know he will be “Riding Wild” with our Lord in Heaven. We all love you very much. Condolences may be left at www.bathnaylor.com. Arrangements and services are under the direction of Bath-Naylor Funeral Home of Pittsburg, KS. In lieu of flowers the family asks expressions of sympathy to be in the form of memorials to the Mount Carmel Foundation. Friends may drop off or mail memorials to Bath-Naylor Funeral Home & Crematory.

Bob (Taz) Peternell On Tuesday morning, December 5th, 2017 our father and best friend, Robert Eugene Peternell passed from this earthly world and into God&#8217;s arms. He was born to John and Jennie (Saia) Peternell in Franklin, Kansas on September... View Obituary & Service Information

The family of Robert "Bob" Eugene Peternell created this Life Tributes page to make it easy to share your memories.

Send flowers to the Peternell family.