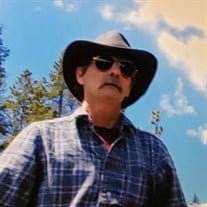 Ricky Lee Grotheer, 59 of Cherokee, Kansas, passed away on Sunday, December 6, 2020 following a sudden illness. Ricky was born on August 6, 1961 in Pittsburg, Kansas, to Richard Leroy Grotheer and Lettie Marie (Herrington) Grotheer. He had one daughter, Jeanie Grotheer (Aaron Clausen), and two grandchildren, Nicole and Colin. He loved that he got to see them every day while he worked and spent time with them every weekend. Ricky had been employed at USD 247 as a bus driver for the past 10 years. He greatly enjoyed his time in the Civil Air Patrol, in which he was involved for six years; being outdoors; and speaking to friends from all across the country on his HAMM radio. He is survived by his daughter Jeanie Grotheer of Cherokee, Kansas; father Richard Grotheer of Weir, Kansas; his sisters, Jenny Morris of Weir, Kansas and Christine Henderson of Pittsburg, Kansas, Tina Zahn and Mary Grotheer both of Girard, Kansas and two grandchildren. He was preceded in death by his mother, Lettie, and his brother, David Grotheer. Friends may come by at their convenience for an informal visitation at Bath-Naylor Funeral Home in Pittsburg, Kansas, on Saturday, December 12, 2020 from 1 - 5 pm. Condolences may be left at www.bathnaylor.com. Services and arrangements are under the direction of the Bath-Naylor Funeral Home of Pittsburg.

The family of Ricky Lee Grotheer created this Life Tributes page to make it easy to share your memories.

Ricky Lee Grotheer, 59 of Cherokee, Kansas, passed away on Sunday,...

Send flowers to the Grotheer family.