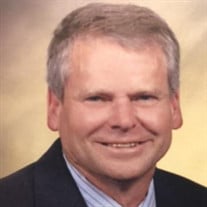 Richard (Butch) Van Becelaere, a lifelong resident of Pittsburg, KS, passed away Thursday, March 25, 2021 at Ascension Via Christi Hospital, Pittsburg, KS. He was born November 14, 1944, and was a member of Our Lady of Lourdes Catholic Church. Richard owned and operated a construction company for over 30 years during which time he built numerous homes, churches, and facilities in and around Pittsburg, KS. Richard graduated St. Mary’s Colgan High School and earned Bachelor of Science and Master’s in Mathematics Degrees from Pittsburg State University. He was a veteran of the U.S. Army Reserve earning the rank of Sergeant. Richard was a dedicated worker, father, husband, grandfather, and member of the community. He had a passion for classic cars and motorcycles, which he enjoyed much of his life. Richard is the son of the late William Sr. and Gertrude (Burns) Van Becelaere. He was preceded in death by brothers Edward, William (Bill) Jr., Robert, and Charles Van Becelaere. He is survived by siblings: Rosemary Hubbard, Teresa Tripp and Fred Van Becelaere. Richard is also survived by his wife Barbara Madrienne (Ysidro) Van Becelaere; daughter Marnie Van Becelaere and spouse Kevin Gootee, and son Ben Van Becelaere and spouse Caralee Van Becelaere; four grandchildren: Alexandria Van Becelaere, Morgan Kennedy, Joshua Van Becelaere, and Seth Van Becelaere. Mass of Christian Burial will be 10 am Monday, March 29, 2021 at Our Lady of Lourdes Catholic Church in Pittsburg with Father Jerome Spexarth as celebrant. The organist will be Kathleen Brown-Cecora and the vocalist will be Judi Fast. Inurnment will be in Highland Park Cemetery, Pittsburg, KS. The parish rosary will be recited at 7 pm, Sunday, March 28, 2021 at the Bath-Naylor Funeral Home, 522 S. Broadway in Pittsburg, KS. The family will receive their friends after the rosary service at the funeral home. A memorial has been established to Our Lady of Lourdes Memorial Fund in care of the funeral home. Condolences may be left at our web site www.bathnaylor.com.

Richard (Butch) Van Becelaere, a lifelong resident of Pittsburg, KS, passed away Thursday, March 25, 2021 at Ascension Via Christi Hospital, Pittsburg, KS. He was born November 14, 1944, and was a member of Our Lady of Lourdes Catholic Church.... View Obituary & Service Information

The family of Richard "Butch" Van Becelaere created this Life Tributes page to make it easy to share your memories.

Send flowers to the VanBecelaere family.