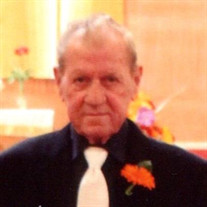 Richard D. McKinney, 77 of Columbus, Ks died Tuesday, Sept. 6, 2016 at his home. He was born May 26, 1939 in Geuda Springs, KS the son of G. Raymond and Helen (Richards) McKinney. On June 18, 1966 he was united in marriage to Jewell Christiensen in Columbus, KS she survives of the home. Richard served his Country in the U.S. Navy for 6 years, Army Reserves for 2 years and the Kansas Air National Guard for 20 years. He worked for Boeing Aircraft in Wichita in Aviation Maintenance and Repair. He was a member of the 1st Christian Church, the American Legion, VFW, Freemasons, Order of the Eastern Star, and the Fraternal Order of the Eagles 1343 Additional survivors include 3 daughters: Kelle (David) Wingate of Valley Center, KS, April (Bill) Bartel of Hillsboro, KS and Nona (Paige) Shane of Shawnee, KS; 2 brothers: David (Leota) McKinney of Baxter Springs, KS and Don (Toni) McKinney of Webb City, MO along with 12 grandchildren and 14 great-grandchildren. Memorial services will be 2 pm Friday, Sept 9, 2016 at the Bath-Naylor Funeral Home in Columbus with Rev. Dennis Johnson officiating. Condolences may be left at www.bathnaylor.com. Services are under the direction of the Bath-Naylor Funeral Home 611 S. East Ave, Columbus, KS.

The family of Richard D. McKinney created this Life Tributes page to make it easy to share your memories.

Send flowers to the McKinney family.