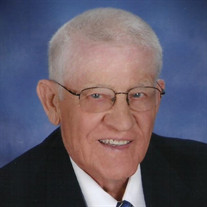 Richard M. Chubb, M.D., MPH passed away January 8, 2019 at his home with his wife by his side following an illness. He was born October 21, 1929 in Joplin, MO to Leonard and Nadine (Marshall) Chubb. He graduated from Baxter Springs High School... View Obituary & Service Information

The family of Richard M. Chubb M.D created this Life Tributes page to make it easy to share your memories.

Send flowers to the Chubb family.