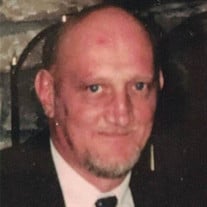 Ralph R. Redd, 64, of Pittsburg passed away at 5:20 P.M. Monday, February 25, 2019 at Pittsburg Care and Rehabilitation, losing his 10 year battle with Alzheimers Disease. Ralph was born April 15th, 1954, in Pittsburg, Kansas, son of Elmer and Wanda (Lea) Redd. He attended area schools and graduated from Pittsburg High School. He married Sherry Brown in 1974 and had one child, Shauna Redd. They later divorced. He married Debbie Murphy on October 27, 2001. She survives at the home. Ralph worked for Hagmans, Dickey Clay and Castlegate. He taught himself how to work on and fix all sorts of electronics, including TVs, VCRs and computers. He was a huge Kansas City Chiefs fan. Survivors include his wife, Debbie; daughter, Shauna Vance and husband Arthur of Pittsburg, KS; two step daughters, Ashley Michel of Pittsburg, KS, and Paige Diver and husband Ian; siblings, Danny Redd and wife Mary of Frontenac, KS, Don Redd and wife Jackie of Pittsburg, KS, Connie Anderson and husband Tim of Chicopee, KS, and Dave Redd and wife Rita of Lufkin, TX; one grandson, and 7 step- grandchildren. He was preceded in death by his parents and one brother, Billy Redd. Funeral Services will be 10:00 A.M. Friday, March 1, 2019 at Bath-Naylor Funeral Home in Pittsburg, KS. Visitation will be from 6:00 P.M. to 8:00 P.M. Thursday, February 28, 2019 at the funeral home. Burial will follow at Crocker Cemetery. In lieu of flowers the family ask expressions of sympathy be in the form of donations to The Alzheimer's Association. Condolences may be left at www.bathnaylor.com Arrangements are by Bath-Naylor Funeral Home of Pittsburg, KS.

The family of Ralph Robert Redd created this Life Tributes page to make it easy to share your memories.