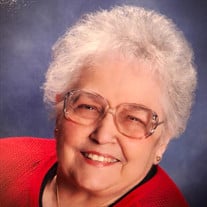 Phyllis M. Fry, 91 of Frontenac, KS formerly of Weir and Pittsburg died Wednesday April 22, 2020 at the Medicalodge of Frontenac. She was born August 8, 1928 in Pittsburg the daughter of Harold and Margaret(Quinn) Fields. Phyllis attended St. Mary's Grade School and High School then went on to Kansas State Teachers College where she met, the love of her life, Thomas L. Fry. Tom and Phyllis were married on May 29, 1948, he preceded her in death on February 19, 1991. Phyllis was a devoted homemaker for her eight children as they traveled the United States living in Kansas, Missouri, Iowa, Ohio, California and New York before settling back in Kansas near her aging parents. Phyllis went on to become the Southeast High School secretary and then the USD 247 Food Service Coordinator, all to be closer to her children as they grew up. She retired from the school system and took up selling real-estate. She found the house of her dreams, so Tom, Phyllis and their youngest daughter Georgeanna moved back to Pittsburg. After Tom passed away Phyllis went to work at the Newman Center as secretary to Father McElwee. She was well known for her Wednesday lunches for the college students, a special favorite was her taco crunch and homemade cookies. Phyllis was a member of the Altar Society and President for a number of years. She assisted the priests of the parish in RCIA, educating new comers joining the church. Phyllis was devoted to her church, Our Lady of Lourdes, the church where she was baptized, made her First Holy Communion, was Confirmed, Married and now will be buried. Survivors include five daughters: Peggy (Bob) Fleming of Weir, KS, Ann (Chuck) Elrod of Pittsburg, Mary Fry of Pittsburg, Theresa (Vince) VanBecelaere of Pittsburg and Georgeanna Fry of Pittsburg; three sons: Tom (Michele) Fry of Kawkawlin, MI, Jim (Tracy) Fry of Grove, OK and Bob (Daphne) Fry of Olathe, KS; along with 26 grandchildren and 32 great-grandchildren. She was preceded in death by her parents, husband, a granddaughter Melissa Fry and a great-granddaughter Charlotte Gill. Due to Covid-19 restrictions private family services will be held. A Memorial Mass will take place at a later date. Burial will be in the Highland Park Cemetery. Condolences may be left at www.bathnaylor.com. Memorials may be made to Our Lady of Lourdes Memorial fund, these may be left at or mailed to the funeral home. Arrangements are under the direction of the Bath-Naylor Funeral Home 522 S. Broadway, Pittsburg, KS 66762.

Phyllis M. Fry, 91 of Frontenac, KS formerly of Weir and Pittsburg died Wednesday April 22, 2020 at the Medicalodge of Frontenac. She was born August 8, 1928 in Pittsburg the daughter of Harold and Margaret(Quinn) Fields. Phyllis attended St.... View Obituary & Service Information

The family of Phyllis M. Fry created this Life Tributes page to make it easy to share your memories.

Send flowers to the Fry family.