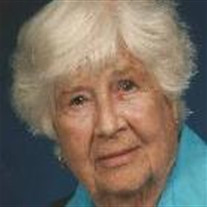 PITTSBURG, KS – Pearl Olive Yaeger, 91, of Pittsburg, died March 13, 2016 at Via Christi Village in Pittsburg, KS. She was born February 17, 1925 in Mindenmines, MO the daughter of Ross and Zella Jones Crowe. She graduated from Mindenmines High School in 1942 and had been a resident of the Frontenac, KS and the surrounding area since 1943. She married Robert O. Yaeger, Sr on June 12, 1943 in Crowburg, KS. He preceded her in death on April 5, 2001. Mrs. Yaeger was a homemaker for most of her life and had also worked as an administrative assistant at Mt. Carmel Medical Center in Pittsburg, KS, prior to her retirement. She was a member of the Frontenac United Methodist Church, was an artist, loved to read and do word search puzzles. Survivors include one son Robert O. Yaeger, Jr. of Pittsburg, three daughters Sharon K. Smith (Jim) of Colorado Springs, CO, Peggy A. Yaeger of Pittsburg and Phyllis N. Scavezze (John) of Tahlequah, Oklahoma, 10 grandchildren, 29 great grandchildren and one great- great-grandchild. She was preceded in death by her husband, parents, four brothers Clifford, Henry, Clyde and Ernest Crowe and three sisters Ruth Lambert, Mildred Delplace and Lavon Volner. Funeral services will be 1 pm Thursday, March 17, 2016 at the Friskel Funeral Home, 230 E. McKay, Frontenac, KS with the Rev. Brian Hill, officiating. Burial will be in the Frontenac City Cemetery. The family will receive friends from 12 to 1 pm Thursday at the funeral home. Friends may call from 11 am to 5 pm Wednesday March 16, 2016 at the Friskel Funeral Home in Frontenac. The family would like to extend a special thank you to the staff of Via Christi Village in Pittsburg and Avalon Hospice for the excellent care they provided to Pearl. A memorial has been established to the Frontenac United Methodist Church or Avalon Hospice in care of the funeral home. Condolences may be left at our web site www.friskelfuneralhome.com.

PITTSBURG, KS &#8211; Pearl Olive Yaeger, 91, of Pittsburg, died March 13, 2016 at Via Christi Village in Pittsburg, KS. She was born February 17, 1925 in Mindenmines, MO the daughter of Ross and Zella Jones Crowe. She graduated from... View Obituary & Service Information

The family of Pearl Olive Yaeger created this Life Tributes page to make it easy to share your memories.

Send flowers to the Yaeger family.