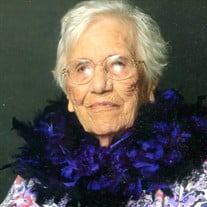 Pauline Hodge 92, of Oronogo, MO formally a lifetime member of Columbus, KS died 2:59am Friday February 23, 2018 at the Carthage Health and Rehab Center following a brief illness. Pauline was born November 6, 1925 in Columbus, KS the daughter of Grover Cleveland and Lydia (Rogers) Beasley. She was a lifelong resident of Columbus and attended area schools. In Pauline’s early years she traveled the midwest in a home built trailer with her mother and stepfather declaring the Good News of God's Kingdom. Later she worked at the local cleaners including Modern Cleaners and Crown Cleaners of Columbus, KS. She later was known to be a homemaker and caregiver. Pauline married Fred Hodge in New Mexico and he preceded her in death on August 4, 2011. Pauline was one of Jehovah’s Witnesses helping others to learn about God's Kingdom; she enjoyed gardening, fishing, camping, was known to be an excellent caregiver to her mother and stepfather Ervin Hitchcock. Survivors include her sons Gary Hodge and wife Carolyn of Miami, OK and Steve Hodge and wife Cami of Oronogo, MO; grandsons Brian Hodge and wife Bridgette of Tulsa, OK, Jacob Borchardt of Oronogo, MO; brother in-law Otto Hodge of Columbus, KS and a grand-puppy Arnold of Oronogo, MO. Pauline was preceded in death by her husband, parents, son David Lee Hodge, brother Floyd Beasley and step-father Ervin Hitchcock who proved to be the best father she could have asked for. Funeral Services will be 2:00pm Saturday March 3, 2018 at the Bath-Naylor Funeral Home in Columbus, KS with Congregation Elder Steve Lichtenhauer officiating. Burial will follow at the Park Cemetery in Columbus, KS. Family will receive friends from 6:30-8:00pm Friday March 2, 2018 at the Bath-Naylor Funeral Home in Columbus, KS; friends may call after 10:00am Friday. Condolences may be left at www.bathnaylor.com. Arrangements and services are under the direction of Bath-Naylor Funeral Home of Columbus, KS.

The family of Pauline Hodge created this Life Tributes page to make it easy to share your memories.

Pauline Hodge 92, of Oronogo, MO formally a lifetime member of...

Send flowers to the Hodge family.