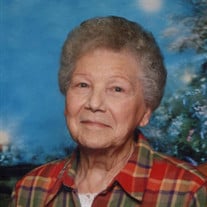 Patsy Lee Huston, 91 of Pittsburg, KS passed away at 11:20 a.m., Tuesday, December 31, 2019. She was born July 7, 1928 in Henry County, Missouri the daughter of Wilford W. and Jessie (Teller) Heuitt. She attended local schools in rural Missouri before taking a job to assist in the war efforts in 1943. On August 24, 1946 she was united in marriage to Leon Dean Huston at Fort Scott, Kansas; he preceded her in death on March 24, 1993. Mrs. Huston worked most recently as a baker at Ron's IGA until she fully retired on January 1, 2015. She truly enjoyed working and interacting with her coworkers and customers. In an interview for a Morning Sun story several years ago Patsy stated “I just dread the thought that someday I might get too old to work." She was also an avid reader and enjoyed baking treats for family and friends. Survivors include a son: Wilford D. Huston and his wife Lisa of Olathe, KS; six grandchildren: Crystal Elmore (Kevin) of Kansas City, MO, Tina Troth (Eric) of Frontenac, KS, Amber Atkins (Phillip) of Arma, KS, Julie Montoya-Huston (Kayli) of Pittsburg, KS, Jonathan Huston of Pittsburg, KS, and Victoria Hamblen of Olathe, KS. Patsy also has five great grandchildren: Kayla Johnston, Kalib Johnston, Zachary Troth, Alexander Troth, and Nathan Troth. She was preceded in death by her parents, husband, daughter Wilma Jean Lake, four brothers and five sisters. Services will be 2pm Sunday, January 5th, 2020 at the Bath-Naylor Funeral Home with Pastor Marcee Binder of the Wesley House. Family will receive friends following the service from 2:30 – 5:00pm. Inurnment of her cremains will be at a later date in the Garden of Memories Cemetery. Condolences may be left at www.bathnaylor.com.

The family of Patsy Lee Huston created this Life Tributes page to make it easy to share your memories.

Send flowers to the Huston family.