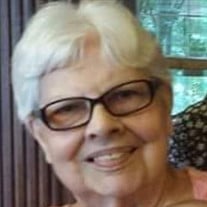 Rogers, AR – Patricia M. Swartz, 83, of Rogers, Arkansas and former a resident of Cherokee, Kansas, passed away December 15, 2017 at Ashley Health and Rehab in Rogers, Arkansas. She was born August 1, 1934 in Gallup, New Mexico. The daughter of Lela Caresio Holden, Rolla Holden and John Irvin. She married Kenneth Swartz on August 9, 1952 in Bentonville, Arkansas. He proceeded her in death June 1991. She was a source of strength and inspiration to her children, her grandchildren and great grandchildren. To her grandchildren, she was known as Monnie. She was kind, loving, caring and generous to everyone she met. Patricia was a member at Our Lady of Lourdes Catholic church in Pittsburg. She was a member of the Democratic Party. Survivors include 2 daughters--Diana Allen of Centerton, Arkansas, Joyce Bartley and her husband Jack, of Bentonville, Arkansas; 2 sisters--Vivian Pelham and her husband Jerry of Tallahassee, Florida; and Peggy Coltrane and her husband Donnie, of Weir, Kansas; Brother-in-law, Johnnie Swartz, and his wife Rita, of Pittsburg, Kansas; 7 grandchildren--Eric Stanley, who she helped raise, and his wife Amanda, of Pittsburg, Kansas; Melissa Swartz of Pittsburg, Kansas; Sarah Swartz and her husband Sonny of Miramar Beach, Florida; Brandy Tuttle and her husband Jackie of Bella Vista, Arkansas; Sarah Bartley of Bentonville, Arkansas; Kevin Bartley and his wife Mindy of Neosho, Missouri; and Dustin Bartley and his wife Julane of Bella Vista Arkansas; 13 great-grandchildren, several nieces and nephews and her lifelong friends the “YaYa’s”--Shirley Clark, Darlene Copenhaver, Barbara Schountz and Noralee Chadd. In addition to her husband she was preceded in death by her parents, and son Allen Swartz who died March, 2010. Memorial services will be 11:00 am on Thursday, December 21, 2017 at Bath-Naylor Funeral Home in Pittsburg, KS, with Father Devin Burns, officiating. A memorial has been established to the Alzheimer’s Association or Multiple Sclerosis Association. Condolences may be left at our website www.bathnaylor.com. Arrangements are under the direction of Bath-Naylor Funeral Home of Pittsburg, KS.

Rogers, AR &#8211; Patricia M. Swartz, 83, of Rogers, Arkansas and former a resident of Cherokee, Kansas, passed away December 15, 2017 at Ashley Health and Rehab in Rogers, Arkansas. She was born August 1, 1934 in Gallup, New Mexico. The daughter... View Obituary & Service Information

The family of Patricia M. Swartz created this Life Tributes page to make it easy to share your memories.

Send flowers to the Swartz family.