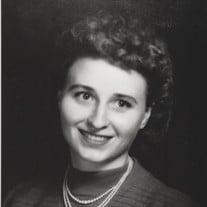 A memorial service and reception celebrating the life of Normal Lou Hall will be held this Saturday, February 24th. Norma was 85 years loved when she died peacefully at the home she built in Columbus, Kansas. She will be dearly missed. Graveside services will be held at the Park Cemetery at 10:30 AM, followed by an 11:30 AM reception and luncheon for family and friends at the First United Methodist Church in Columbus. Norma was born on December 1, 1932 on a farm in rural Columbus. She was a lifetime resident of Cherokee County Kansas. She was the daughter of Clair and Ruth (Draeger) Handshy. After graduating from Columbus High School in 1949, Norma became a devoted wife, a nurturing mother, and a great cook. She met the Lord on February 17, 2018. She married Robert Dean ‘Bud’ Hall on January 1949, in Bentonville, Arkansas. They were married for 57 years, when he died in 2006. Norma was a member of the First United Methodist Church and was a founding member and leader of the Glittering Stone 4-H Club. She was active in the Columbus Genealogy Society, The Women’s Golf League at Columbus Country Club, and enjoyed both square dancing and senior center dances. She also cherished travel with family and tending to her flowers, garden, trees, and birds. Survivors include her daughter, Connie Davis and her husband, Mark, of Omaha, Nebraska; two sons; Steve and his wife, Linda, of Columbus, and Doug and his wife, Lesta, of rural Columbus; eight grandchildren, Matt (Stacy) Davis, Scott (Lindsey) Davis, Jeff (Jane) Davis, Katie (Greg) Wehmeyer, Christopher (Kelly) Hall, Stephanie Hall, Brian Hall, Kaitlin (Rob) Baldwin, and twelve great-grandchildren; Alex, Ben, Jacob, Zach, Lucas, Jenny, Ethan, Beth, Emma, Hannah, Andrew, and Zack; three brothers; Bob, Bud, and Stanley, and four sisters; Dorothy, Betty, Frieda, and Becky. She was preceded in death by brothers, Charles ‘Sunny’ and Wayne. In lieu of flowers, friends may make memorial donations to the United Methodist Church of Columbus. The Bath-Naylor Funeral Home of Columbus is handling all arrangements.

A memorial service and reception celebrating the life of Normal Lou Hall will be held this Saturday, February 24th. Norma was 85 years loved when she died peacefully at the home she built in Columbus, Kansas. She will be dearly missed. Graveside... View Obituary & Service Information

The family of Norma Lou Hall created this Life Tributes page to make it easy to share your memories.

A memorial service and reception celebrating the life of Normal...

Send flowers to the Hall family.