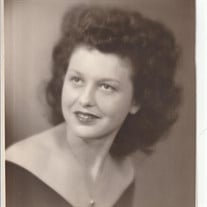 Noretta B. Caldwell, age 92 passed away at Ascension Via Christi Hospital in Pittsburg Ks on September 6, 2020. She was born to Albert L. and Jennie D. (Gager) Magner at home outside Galesburg, Ks on December 7, 1927. She was the third child born to the family. She had 4 brothers, and one sister. She graduated from Galesburg High School in 1945. Noretta worked in Parsons for a furniture store and then became a telephone operator. She always told everyone she was a “call girl”. She met her future husband, Merritt Lee Caldwell, who was in the Marine Corp in Chicago, and married him on May 16, 1947 at the Galesburg Methodist Church. Since Lee was in construction, she traveled many places from Chanute, Kansas to High Island in Texas, San Antonio, Texas to White Horse near Los Alamos, NM, then to Independence, Kansas to Coffeyville and settled in Pittsburg in October 1960. She became an avid golfer and was in the Championship League in Coffeyville and then Pittsburg at the Crestwood Country Club, serving many offices with the Ladies Golf League. She and her husband traveled on a caravan to Mexico for 6 weeks. They traveled through all the states. Noretta and Lee Caldwell were also part owners of the Turpin Meadow Ranch in Moran, Wyoming. Her husband built many apartment complexes for her to manage. Noretta was Owner/Manager of Golden Crown Properties, which managed several triplexes, apartments and storage units. Along with, Barbara, her daughter, Noretta managed the properties which included maintenance and upkeep, as well as bookkeeping. After her husband died, she traveled overseas with her daughter, Karen, vacationing on many cruise ships. Their travels included Ireland, Scotland, England, Italy, Greece, Sicily, Panama Canal, Hawaii, Alaska, Virgin Islands, Caribbean islands. She retired at the age of 85 in 2012 and sold all her properties. She has given to many Local and National charities including two scholarships at Pittsburg State University for Technology and general education in the name of “Noretta and Merritt Lee Caldwell”. Scholarships are also set up through the SE Kansas Community Foundation for students at Labette Community College, Fort Scott Community College and Neosho County Community College. Noretta was preceded in death by her husband, M. L. Caldwell; her parents, Albert and Jennie Manger and her brothers, Elford Magner, Albert Manger and Irvin Magner and her sister, Luretta Hanks. Survivors include one brother, Lyle Magner of Liberal, KS. Two daughters, Karen Bryan of Pittsburg, Barbara Loiselle and husband, Dave Loiselle of Cherokee Kansas; and one son, Gail Caldwell of Pittsburg. She is survived by 6 grandchildren: Tracy Caldwell of Dallas, TX; Annette Santore and husband Robert of Elk Grove, IL; Paula Kermashek and husband Jason of Pittsburg; David L. Loiselle and wife Madeline of Albuquerque, NM; Dessa Caldwell of Omaha, NE and Merritt Caldwell of Omaha, NE. She had 5 great grandchildren: Cody Hayden, Logan Mapes, Norah Kermashek, Ryker Caldwell, and David Eli Loiselle. She had one great great grandchild: Leighton Hayden. She had a wonderful life and we will remember her as Mom, Grandma and the Lady she was. She always felt she was truly blessed in her life. Graveside services will be 10:00am Saturday September 12, 2020 at the Highland Park Cemetery in Pittsburg, KS with Pastor Duane Elmore officiating. Per Noretta’s wishes no visitation or viewing will be conducted. Condolences may be left at www.bathnaylor.com. Arrangements and services are under the direction of Bath-Naylor Funeral Home of Pittsburg, KS.

Noretta B. Caldwell, age 92 passed away at Ascension Via Christi Hospital in Pittsburg Ks on September 6, 2020. She was born to Albert L. and Jennie D. (Gager) Magner at home outside Galesburg, Ks on December 7, 1927. She was the third child... View Obituary & Service Information

The family of Noretta B. Caldwell created this Life Tributes page to make it easy to share your memories.

Noretta B. Caldwell, age 92 passed away at Ascension Via Christi...

Send flowers to the Caldwell family.