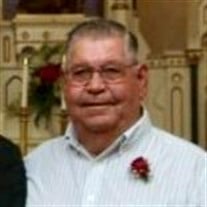 CHEROKEE, KS – Noel C. Rakestraw 77 of Cherokee, died December 6, 2016 at his home after a long illness. His family was the light of his life. He was born January 18, 1939 in Bethany, MO. Noel was the son of Don and Imohl Hadlock and had lived in Cherokee since 1979. He was a graduate of Ridgeway High School and senior class president. He married Janice Bucy on June7, 1959 in Ridgeway, MO. She survives at the home in Cherokee. She was a true example of a dedicated wife caring for her husband during his many years of illness and also a dedicated mother and grandmother. Noel was a foreman at Alternate Fuels and later was a self employed truck driver for many years. He was a member of the First Baptist Church in Cherokee, former mayor of the City of Cherokee, had a passion for chevy antique cars and the youngest auctioneer in the state of Missouri for many years. Survivors include his wife Janice of the home in Cherokee, two sons Kenneth Robert Rakestraw (Karen) and Michael Lee Rakestraw (Kathy) both of Pittsburg one daughter Patricia Ann Brown-Rakestraw of Cherokee, seven grandchildren Kendra Ramsey (Justin), Kylan Rakestraw (Brigetta), Courtney Rakestraw, Sydney Rakestraw, Bryan Allen (Ashley), Travis Allen (Keele) and Aaron Lake (Jessica), six great grandsons Kayden Allen, Connor Allen, Karter Allen, Kanon Allen, Keaton Rakestraw and Krewson Rakestraw and two more great grandchildren that are expected soon. He is also survived by his many friends and will be remembered for his quick wit and sense of humor. He was preceded in death by a half sister Donna Tate and a step brother David Hadlock. Memorial services will be 10 am Tuesday December 13, 2016 at the Bath-Naylor Funeral Home in Weir, KS with the Rev. Jamie Tickel officiating. Inurnment will be at a later date in the Cherokee City Cemetery in Cherokee, KS. The family will receive friends from 6 to 8 pm Monday at the Bath-Naylor Funeral Home in Weir, KS. A memorial has been established to the Kidney Foundation in care of the funeral home. Condolences may be left at our web site www.bathnaylor.com.

The family of Noel C. Rakestraw created this Life Tributes page to make it easy to share your memories.

Send flowers to the Rakestraw family.