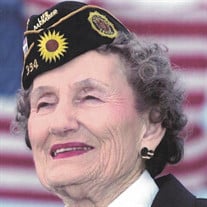 Nadine L. Johnson 97 of Pittsburg, Kansas, was called by the Lord on August 7, 2018. She was born in Yates Center, Kansas on March 18, 1921 to Hoyt B. and Naomi Silvey Stocker, and graduated from Girard High School in 1938. Nadine spent over... View Obituary & Service Information

The family of Nadine Lee Johnson created this Life Tributes page to make it easy to share your memories.

Nadine L. Johnson 97 of Pittsburg, Kansas, was called by the...

Send flowers to the Johnson family.