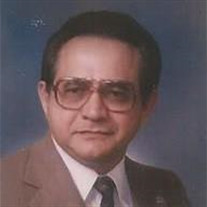 PITTSBURG, KS – Modesto S. Gometz, MD, 81, of Pittsburg, died January 31, 2017 at his home. He was born June 15, 1935 in Ypacaraí, Paraguay the son of Florentin and Isidora Villalba Gomez. Dr. Gometz first earned a degree of public accounting at the National School of Commerce, then a Bachelor of Science at the National College, both in Paraguay. He received his medical degree in 1963 from the National University in Paraguay, and did his residency from 1964 to 1967 at the Pediatric National University in Paraguay. He also served in the Paraguayan Army and was honorably discharged as a Lieutenant. He moved from Asunción to Connecticut in 1968 to complete a one-year medical internship then continued his training at the University of Kansas School of Medicine in Kansas City, KS where he completed his pediatric residency in 1971. He began his career working as a staff physician and then director of child development and clinical director at Parsons State Hospital and Training Center, working with disabled children. In 1974 he moved to Pittsburg where he began his work serving the community as a pediatrician until 2015 when he retired, most of those years providing care in his own private practice at the Children and Teenagers Clinic. He served as an adjunct professor of psychology and counselor of education at Pittsburg State University from 1972 to 1975, and was a clinical instructor at the KU Medical Center from 1975 to 2000 and a clinical assistant professor in pediatrics at the University of Kansas Medical School, Wichita, from 1980 to 1990. He also served on the Governor's Coordinating Council on Early Childhood Developmental Services from 1989 to 2005, was president of Mt. Carmel Hospital Medical Staff from 1987 to 1988, and chairman of the Health Advisory Committee of the National Foundation March of Dimes from 1975 to 1980. Dr. Gometz was a Fellow of the American Academy of Pediatrics and a Fellow of the International College of Pediatrics. He held memberships in the Kansas Medical Association, Crawford County Medical Association, the Tourette's Syndrome Association, the Pittsburg Noon Rotary Club, the Pittsburg Chamber of Commerce, and Our Lady of Lourdes Catholic Church. He married Nilda D. Aranda on September 21, 1967 in Asunción, Paraguay. She survives and remains a resident of Pittsburg, KS. Survivors include his wife Nilda; two sons Eric A. Gometz and his wife Carol of Overland Park, KS and Edward D. Gometz, MD and his wife Shannon of Chicago, Illinois; three sisters Agustina Gomez of Asunción, Paraguay, Marta Heintzelman of Kensington, MD and Nilda de Sanabria of Asunción, Paraguay; five grandchildren Sofia, Alexander, Nicolas, Juliana and Gabriel. Dr. Gometz loved caring for his patients. When interviewed by the Pittsburg Sun about his retirement, he said: "I have over 150 people who were patients of mine who brought back their children to me to take care of them. I have a great satisfaction with that." Mass of Christian Burial will be 2 pm, Saturday, February 4, 2017 at Our Lady of Lourdes Catholic Church in Pittsburg with Father Michael Baldwin, as Celebrant. Inurnment will be at a later date in Asunción, Paraguay. The vocalist will be Dolores Towner and the organist will be Sharon Barone. The lector will be Joe Hart. The parish Rosary will be recited by Father David Voss at 6 pm Friday, February 3, 2017 at the Bath-Naylor Funeral Home, 522 S. Broadway in Pittsburg, KS. Visitation will follow the Rosary. A memorial has been established at Our Lady of Lourdes Memorial Fund in care of the funeral home. Condolences may be left at our web site www.bathnaylor.com.

The family of Modesto S. Gometz M.D. created this Life Tributes page to make it easy to share your memories.

Send flowers to the Gometz family.