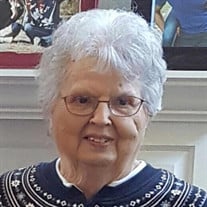 Mildred Irene Spritzer, 81 of Frontenac, died February 23, 2021 at Freeman Hospital in Joplin, MO. She was born September 9, 1939 in Columbus, Kansas to Mildred and Walter O’ Brown. Irene graduated from Pittsburg High School in 1957, then went on to attend Kansas State Teachers College where she received her degree in Elementary Education, she taught in Peabody Kansas. She married Michael Spritzer June 8, 1963 at Sacred Heart Catholic Church. They were stationed in California from 1963 to 1969 while her husband served in the Navy. She and her husband returned to Frontenac in 1969 to take over the family owned Frontenac Bakery. She continued the operation of the bakery after the death of her husband and sold it in 1997. Irene was actively involved in Girl Scouts, 4-H Club and religion classes while her children were growing up. She enjoyed her retirement by spending time with her sister, spoiling her grandchildren, reading and taking care of her flowers. Survivors include four children: Kelly (Trey) Coleman, Michelle (Doug) Sellars, Kim (Gaylar Poppe) Wilson and Kevin Spritzer; a sister: Margaret Bryan and a brother Robert Brown; grandchildren Zachary Holliday, Blake Wilson, Katlyn Sellars, Haley Wilson, Taylor Holliday, Brittany Sellars, Courtney Sellars, Michael and William Spritzer and Thalea Sellars. She was preceded in death by her Parents, husband, Michael Spritzer, sister Claudine Daniels, a brother Bill Brown. Mass of Christian Burial will be 10 am Saturday February 27, 2021 at the Sacred Heart Catholic Church with Father PJ Voegeli as Celebrant. Burial will follow in the Mt. Carmel Cemetery. Family will receive friends at the funeral home from 6-8 pm Friday evening. Condolences may be left at www.friskelfuneralhome.com. Memorials may be made to the Sacred Heart Church and/or the Salvation Army. Services by Friskel Funeral Home Frontenac, KS.

The family of Mildred Irene Spritzer created this Life Tributes page to make it easy to share your memories.

Send flowers to the Spritzer family.