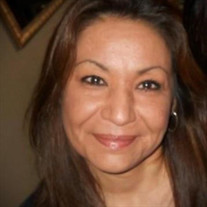 Michelle Montoya, 55, passed away suddenly at her home on March 22nd, 2022. Michelle was born on June 24th, 1966, in Sacramento, CA to Isabel Vigueria and Manuel Fernandez Sr. She was one of eight children, four boys and four girls. Michelle wasn’t just “one” of the eight from the Fernandez clan, she was number seven of eight. If your family is big enough to start their own band, number seven doesn’t sound very significant. She’d probably play something uninspiring like the triangle or tambourine, but Michelle was anything but uninspiring. She was the youngest girl in the family, which is what made number seven so special. On the day she entered this world she already had three older bothers to protect her, and three older sisters ready to spoil her, and shortly after she arrived, she gained a younger brother to love and protect. Each and every one of her relationships with her siblings meant the world to her and held such a special place in her heart. From a very young age, Michelle loved the outdoors, animals, and art. She is remembered as a child full of life, always smiling, and having the most adorable, perfectly round cheeks. She loved life and all its adventures. If she saw something that caught her eye, or her heart, she would hold up an imaginary camera, take a photo, and say, “just taking a picture so I can remember this moment forever.” The same passions she had as a child, grew when Michelle became a mother. She had four beautiful children, two boys and two girls, who she loved more than life itself. Being a mom was the honor of her life and identity for almost all of it. Nothing gave her more joy then sharing her passions with her children, watching them grow, seeing them find their own passions, and following all the milestones they reached along the way. She was proceeded in death by her older brother Steven Fernandez. Michelle is survived by her children, Steven Llanes, Gabriel Llanes, Isabel De Leon, and Lauren Potter (Adam Potter). Her siblings, Manuel Fernandez, Candy Claypole, Gregory “Greg” Fernandez, Adrienne “Andy” Sorrell, Andrea “Toni” Fernandez, Gabriel “Shem” Fernandez, and her parents, Isabel Vigueria and Manuel Fernandez Sr. If you would like to honor Michelle in a special way that was close to her heart, please paint a kindness rock in her remembrance and leave it somewhere special to be found. A Celebration of Life will be held in remembrance of Michelle, service dates and time will be announced on a later date.

Michelle Montoya, 55, passed away suddenly at her home on March 22nd, 2022. Michelle was born on June 24th, 1966, in Sacramento, CA to Isabel Vigueria and Manuel Fernandez Sr. She was one of eight children, four boys and four girls. Michelle... View Obituary & Service Information

The family of Michelle A. Montoya created this Life Tributes page to make it easy to share your memories.

Michelle Montoya, 55, passed away suddenly at her home on March...

Send flowers to the Montoya family.