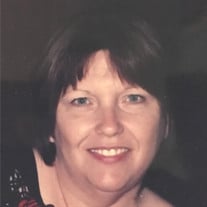 Michelle J. “Mickey” Groves, a devoted wife, mother and grandmother, age 62, of Columbus, died Thursday, March 16, 2017 following a courageous battle with cancer. She passed away peacefully with her family at her side. Mickey was born of the union of George and Donna Winters on December 1, 1954. She graduated from Southeast High School and soon after, married the love of her life, Gary Groves on December 27, 1972. Mickey graduated from Labette Community College and became a Registered Nurse. Following a dedicated career with the Cherokee County Health Department, Mickey retired in January 2016 and enjoyed spending time with her family and dog, Sammy. Mickey and Gary spent many days fishing and traveling, but she truly enjoyed supporting and cheering on her grandson, Zeppelin Speer, whether it was at ball games, math competitions or band performances. She was a lifetime member of the Scammon Presbyterian Church, where she had served as an elder, Sunday School Teacher and enjoyed playing piano during services. She was also a member of the American Legion Women’s Auxiliary. Survivors include her husband Gary, of the home and their three children, Christy and Tyler Speer, their son Zeppelin, David and Ashley Groves and Dusty Groves and Natalie Speer, all of whom she loved and was proud of. She is also survived by her brother John Winters and wife Frankie of Webb City, Missouri, her sister Sue Winters of Bentonville, Arkansas along with numerous nieces and nephews. Mickey was preceded in death by her parents and younger brother, George Dodson Winters. Memorial services will be 10 am Monday, March 20, 2017 at the Bath-Naylor Funeral Home in Columbus with Pastor Rodney Peters and Pastor Ollie Heth officiating. Family will receive friends at the funeral home on Sunday evening from 6:00 – 8:00pm. Condolences may be left at www.bathnaylor.com. The family has requested in lieu of flowers, memorial contributions be made to the Scammon Presbyterian Church; these may be left at or mailed to the funeral home. Services and arrangements are under the direction of Bath-Naylor Funeral Home in Columbus.

Michelle J. &#8220;Mickey&#8221; Groves, a devoted wife, mother and grandmother, age 62, of Columbus, died Thursday, March 16, 2017 following a courageous battle with cancer. She passed away peacefully with her family at her side. Mickey... View Obituary & Service Information

The family of Michelle "Mickey" J. Groves created this Life Tributes page to make it easy to share your memories.

Send flowers to the Groves family.