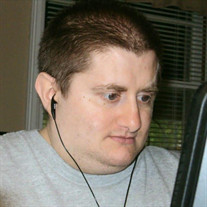 Michael Bryan Blatchley October 26, 1974 – August 11, 2021 On Wednesday, August 11, 2021, Michael Bryan Blatchley, 46 years old, beloved son of Dr. Charles and Sherry Blatchley of Joplin, MO, formerly of Pittsburg, KS, died of sudden cardiac arrest after a life-long battle with heart related issues. Michael is survived by his parents, of the home, and two siblings, a sister, Michelle Willis of Oswego, KS and a brother, Matthew Blatchley of Reidsville, NC. Sister Michelle with her husband, Ryan Willis, have a son, Nicholas, also of Oswego, KS and daughter, Brittany Hill and her husband, Sage Hill of Andover, KS. Michael’s brother, Matthew, resides with his wife, Renee Blatchley, and their children, Dayahna, Jonathan, Eli and Oliver also of Reidsville, NC. Michael loved cooking, and in spite of his physical limitations, would often prepare his own meals. He collected recipes and shared them freely with other family members. He also carefully monitored weather conditions, both locally and where relatives and friends lived, having been a volunteer weather recorder/spotter for the NWS in New Hampshire, where he attended elementary and secondary schools. We will all miss his frequent weather updates, along with joking critiques of restaurant safety inspections. Michael had attended Pittsburg State University, and continued to be a loyal fan of Gorilla football. He had a life long fascination with trains, both working trains and models. On trips that followed near tracks, he would read the train control lights to predict whether or not a train was ahead. He was also an avid fan of team sports particularly football and basketball, at both the collegiate and professional levels, and could provide amazing details of game histories, players, and statistics. He enjoyed watching live broadcasts of games but would often watch older, historical games. Most of all he treasured the trips to stadiums and parks to watch his favorite teams play live. When his teams were not playing, he could often be found exercising a digital version of the same sports. His room is decorated with emblems and memorabilia of those teams. They have lost their greatest fan and Michael’s beloved dog, Peanut, has lost his master and still guards his room, waiting for Michael to return. The funeral service for Michael will be held at St. Peter’s Episcopal Church in Pittsburg, KS on Saturday, November 13, 2021 at 10:30 AM. The family has suggested that in lieu of flowers, donations be given to Mike’s favorite charity, Samaritan’s Purse Children’s Heart Project. The family would like to thank the many medical personnel, who have been responsible for Michael’s care through these trying years, in particular, Holly Cranston, MD, Stephanie Wagner, ARNP and and the compassionate staff at the Cranston Clinic in Pittsburg, KS for Michael’s primary care; Boban N. Mathew, MD and Hilah Perkins, ANP of Ascension Via Christi Cancer Center in Pittsburg, KS and the Cancer Center staff and volunteers; Raymond Vetsch, MD and John M. Cox, MD and the staff at the Freeman Heart and Vascular Institute in Joplin, MO for their skill and knowledge of Michael’s cardiac issues; Lincare Oxygen Therapy in Joplin, MO; and the kind and caring professionals at Mag-Lab in Pittsburg, KS.

The family of Michael Bryan Blatchley created this Life Tributes page to make it easy to share your memories.

Send flowers to the Blatchley family.