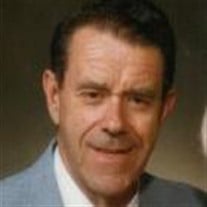 Merl Salsbury, 88 (butcher, baker, candlestick maker) of Pittsburg died Sunday April 24, 2016 at his home in Pittsburg. He was born June 8, 1927 in Elroy, WI the son of Glenn and Mabel (Engle) Salsbury. He was a graduate of Elroy WI High School and attended some welding/machine shop college courses at PSU. Merl and his family had been residents of Pittsburg since 1965 moving from Ft. Scott where they had resided since 1950 moving from Wisconsin. He was a veteran of WWII serving his country in the United States Army from 1945-1947; he was a part of the group that occupied Saipan. Merl married Dorothy Johnson on June 26, 1948 in Elroy, WI; she preceded him in death on May 23, 2013. He was owner/operator of Daylight Donut Shop in Pittsburg from 1956 until 1987 and then owner/operator of 601 Donut Shop from 1991 until 2012. Merl was a member of the First United Methodist Church in Pittsburg, was a trustee and sat on the administrative board all within the church. He earned his pilot’s license in the 1960’s. Survivors include a son Glenn Salsbury and wife Cheryl of Frontenac; 3 daughters Judy Mimms and husband Kelly of Clovis, NM, Patricia Richard of Pittsburg and Donna Salsbury of Kansas City, MO; a sister Joyce Jones of Shreveport, LA; 6 grandchildren and 11 Great- grandchildren. He was preceded in death by his parents, wife a grandson Michael Salsbury and a brother Floyd Salsbury. Funeral services will be 11 a.m. Thursday April 28, 2016 at the First United Methodist Church in Pittsburg with Reverend Mark Chambers officiating. The family will receive friends from 10 a.m. until service time on Thursday at the church. Private family graveside services will be Thursday afternoon at the Ft. Scott National Cemetery. Condolences can be sent to www.bathnaylor.com In lieu of flowers memorial contributions can be made to the Youthville of Newton, KS or the Pittsburg Public Library. Memorials may be brought by or mailed to the Bath-Naylor Funeral Home 522 S. Broadway Pittsburg, KS 66762.

Merl Salsbury, 88 (butcher, baker, candlestick maker) of Pittsburg died Sunday April 24, 2016 at his home in Pittsburg. He was born June 8, 1927 in Elroy, WI the son of Glenn and Mabel (Engle) Salsbury. He was a graduate of Elroy... View Obituary & Service Information

The family of Merl Salsbury created this Life Tributes page to make it easy to share your memories.

Send flowers to the Salsbury family.