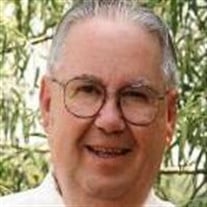 Melvin W. Harris, 80 of Frontenac, died at 2:45 a.m. Tuesday May 10th 2016 at the Via Christi Hospital in Pittsburg. He was born August 5, 1935 in Ft. Scott, KS the son of Arthur C. and Goldia May (Duncan) Harris. He graduated from Fort Scott High School, received an associate’s degree in social sciences from Ft. Scott Community College, and attended Kansas State Teachers College in Pittsburg. Melvin was a veteran of the Korean War serving his country in the United States Army. He married Beryl Shurley Braden on February 12, 1982 in Miami, OK; she survives at the home. Melvin worked for McNally Mfg. in Pittsburg for 20 years; worked as a corrections officer for the State of Kansas, and worked for the Coffey County Republican newspaper from 1997-2000. He was a member of the First Church of the Nazarene in Pittsburg; he enjoyed woodworking and reading. In addition to his wife Beryl, he is survived by stepchildren-Janice Kelley of Ogden, UT, Randall Braden of Hays, KS, Louis Braden of Pueblo, CO, Jeanmarie Dancer and Dawson Braden both of Toronto, KS; several step-grandchildren, step-great grandchildren, nieces and nephews. He was preceded in death by his parents, a brother Louie Harris and 4 sisters Lovell Tweedy, Maxine Wright, Christine Johnson and Leota Savage. Funeral services will be 11 a.m. Thursday May 12, 2016 at the Bath-Naylor Funeral Home in Pittsburg with Reverend Jim Sukraw officiating. Burial will follow in the Fort Scott National Cemetery where the Kansas Army National Guard Funeral Honors Detail Team will provide flag folding and presentation ceremonies. The family will receive friends from 10 a.m. until service time on Thursday. Condolences can be sent to www.bathnaylor.com Arrangements are under the direction of the Bath-Naylor Funeral Home 522 S. Broadway Pittsburg, KS.

The family of Melvin W. Harris created this Life Tributes page to make it easy to share your memories.