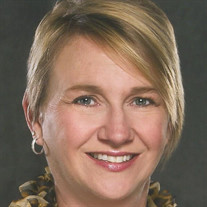 Melissa “Missi” Anne (Lindsay) Kelly, 50, of Pittsburg, Kansas passed away at 6:55 p.m. on Thursday, March 16 at Via Christi Hospital surrounded by family and friends following a brief but courageous battle with cancer. She was the beloved wife of Chris Kelly. The youngest of five children, Missi was born on February 1, 1967 in Pittsburg, to Bill and Mary (Bevans) Lindsay. Missi graduated from Pittsburg High School with the class of 1985. In 1992, she earned her bachelor’s degree from Pittsburg State University. On October 12, 1996 she was united in marriage to Chris Kelly in Timmons Chapel on the campus of Pittsburg State. Missi was a pioneer among women in broadcasting. Starting as a part-time student employee at KRPS public radio (where she and Chris first met), Missi would become the youngest and longest tenured general manager in the radio station’s history. She joined the Kansas Public Broadcasting Council in 2001, and served as chairperson from 2008-2010. Missi served on the Habitat for Humanity Board, as a facilitator for Crawford County Youth Leadership, volunteered at the Joplin Humane Society, and was a member of the Pittsburg High School Career and Technical Education Advisory Board for six years. In 2015, she was recognized for her achievements by being named a Woman of Distinction by the Pittsburg Area Chamber of Commerce. Missi’s life revolved around her family, friends, shopping trips with her mother and Pittsburg State University basketball. She and her husband, Chris, were fixtures on the front row of nearly every home game since 1997. No words can accurately describe what Missi meant to those who knew her. She was a loving wife, devoted daughter, faithful sister, successful leader and a selfless friend. Missi is survived by her husband Chris Kelly of Pittsburg; her parents, Bill and Mary (Bevans) Lindsay of Pittsburg, and her four beloved cats, Tucker, Indy, Sookie and Carlos. She is also survived by her four siblings. Mick Lindsay, Bill (Suzanne) Lindsay, Cathi Lindsay (Steve Gaikowski) and Sherri Lindsay (Scott Henson), all of Pittsburg. Additional survivors include her three nephews, Jason Franklin, Joey Franklin and Alec Lindsay-Gaikowski; her niece Autumn Lindsay-Gaikowski and dear friend, Bryna Broyles. Visitation will take place from 7 p.m. - 8 p.m. on Tuesday, March 21. Services will be held at 2 p.m. on Wednesday, March 22, 2017 with Pete Mayo, Director of Spiritual Care at Via Christi Hospital, officiating. The eulogy will be by James M. Aubuchon, Brigadier General, US Army (Ret.). Both events will be held at Bath Naylor Funeral Home, 522 S. Broadway, Pittsburg, KS, 66762. Pallbearers will be Steve Gaikowski, Scott Henson, Jason Franklin, Joey Franklin, Alec Lindsay-Gaikowski. Honorary pallbearers will be Bryna Broyles and Autumn Lindsay-Gaikowski. Burial will follow at Highland Park Cemetery. In lieu of flowers, the family requests gifts be made to the Joplin Humane Society or PSU Foundation in support of women’s and men’s basketball. Condolences may be left at our web site www.bathnaylor.com.

Melissa &#8220;Missi&#8221; Anne (Lindsay) Kelly, 50, of Pittsburg, Kansas passed away at 6:55 p.m. on Thursday, March 16 at Via Christi Hospital surrounded by family and friends following a brief but courageous battle with cancer. She was the... View Obituary & Service Information

The family of Melissa "Missi" Anne Kelly created this Life Tributes page to make it easy to share your memories.

Send flowers to the Kelly family.